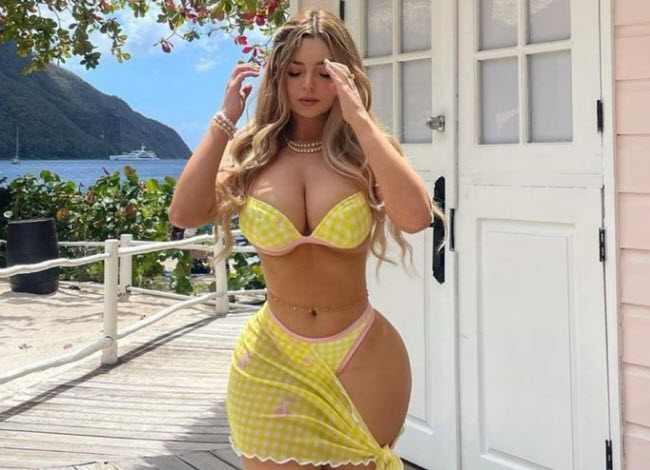 OnlyFans star Demi Rose left extremely little to the imagination when she ditched her clothes and went topless for a saucy dip in an infinity pool in Costa Rica .

he’s certainly not afraid to bare all in her sizzling social media snaps.

But Demi Rose could have broken the internet when she ditched her bikini and went totally topless for a saucy dip in an infinity pool in Costa Rica.

The stunning OnlyFans star risked being slapped with an Instagram ban when she took to Instagram Stories on Tuesday morning (November 8) with her latest clip.

Demi, 27, flashed her famous curves on camera as she climbed into the luxury pool and frolicked around in the water in nothing but a teeny black thong.

The stunning influencer left extremely little to the imagination as she swam around the pool that was surrounded by stunning scenes of the Costa Rican jungle.

However, Demi ensured all eyes were firmly fixed on her during her daily workout as she stretched out in the water with her famous curves on display.

The model broke temperature gauges as she exposed her hourglass figure and peachy derriere at the start of the clip.

She tied back her lush bright red locks in a loose bun to avoid getting them soaked in the pool during her swim.

But she let her red hair flow over her back in another saucy snap which saw her sit down on a rock and show off her bombshell behind again.

It’s not the first time Demi’s uploaded jaw dropping photos from her time in Costa Rica as she recently posed topless by a waterfall.

She wore only a wet and white cover-up to stop her curves spilling out on camera as she laid playfully by the river.

Fans flooded the comments with declarations of her beauty, with one gushing: “You are truly an icon of beauty!!”

Another added: “Nothing like a refreshing dip have a fantastic day Demi”.