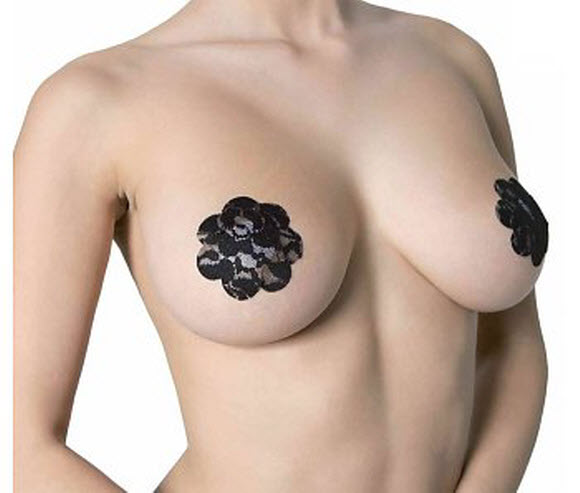 Pasties are patches that cover a person’s nipples and areolae which are affixed with adhesive.

Pasties come in a variety of colors, diameters, and shapes. Though pasties come in a variety of sizes, they usually are not much larger than the areola. Pasties are usually applied with a special tape or glue fixative, often gum arabic. However, in some situations keeping pasties from falling off can be an issue, as can be their removal. Some women are allergic to some adhesives or pastie material. Due to this, most high quality nipples are made of hypoallergenic silicone and use special adhesives to reduce the chances of an allergic reaction. Some pasties are for single-use, while others are washable and can be reused.

A sideless bikini bottom is sometimes worn to complement a pasties top outfit, this can be a C-string held by an internal flexible frame or other pasties sustained with adhesive, commonly known as a merkin. These pasties for the genitalia are known as maebari in Japanese. 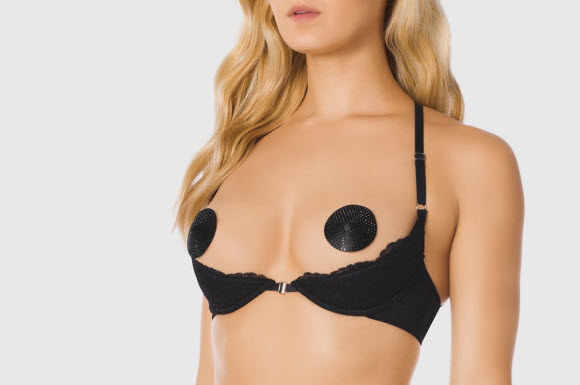 Pasties were and may still be worn by some actresses while filming an otherwise apparently topless or nude scene, which is not caught by the camera angle.

Pasties are occasionally worn on beaches to maximize a sun tan, short of being topless or nude, and avoid the strap lines which bikinis produce. Swimwear named strapless bikini (not to be confused with bandeau bikini tops) or no string bikini by various manufacturers is basically a combination of pasties with a matching maebari-style bottom.