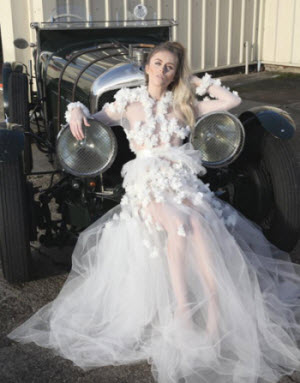 Launched in 2008, the TIA competition attracted entries from undergraduate design students from countries around the world.

Students competed in national finals for a chance to participate in a gala international runway show judged by a celebrity jury, with prizes including cash, job placements and a chance to have your student project turned into a commercial garment sold in Triumph stores around the world.

“After five consecutive years of being the leading lingerie design award in the lingerie industry, the TIA, like most competitive concepts that want to remain relevant over time, should take a creative break,” Triumph International announced on its Facebook page. The company statement did not indicate when, if ever, the awards competition will return.

“We are well aware that the TIA has been such a huge success mainly as a result of the hard work, dedication, and true passion of all the young designers and their lecturers, as well as the continuous support of the consumers,” the company said. “We will continue to support design talents around the world as best we can, sharing our experience and business insight.”

Since its debut, the Triumph Inspiration Awards have been enormously popular with fashion design students and closely followed by the fashion press. The competition introduced the public and industry observers to the best young designers in the world and gave students an unrivaled showcase for their talents.

The 2012 grand prize winner, Sian Whitefoot of England, earned £15,000 and an internship at Triumph, and is currently working to turn her opulent bridal corset called “Ecliptic Renewal” into a commercial lingerie line for Triumph stores.

The De Montfort University student was also invited to create the luxurious bridal piece shown below for inclusion in the Maison Triumph pop-up shop and exhibition during London Fashion Week in February.

Typically, the TIA competition has attracted extravagant and technically complex entries from aspiring lingerie designers — its first winner was a Japanese entry that featured pillow-sized lips attached to panties.

Since then, student competitors — spurred on by the generous prizes and the implicit career opportunities — have raised the bar each successive year with visionary conceptual garments that go far beyond anyone’s traditional definition of lingerie. No doubt about it, TIA will be missed.

Below are the winning entries from TIA’s first four years, alongside the market garments that were eventually sold based on the winning designs.