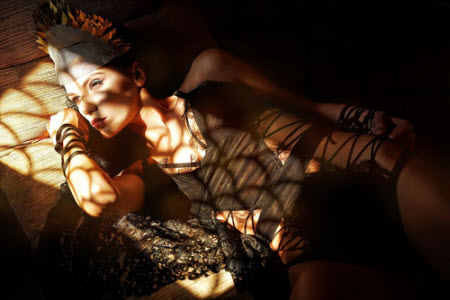 Many of the world’s art masterpieces are works of passion and longing, created by artists who struggled to capture the fleeting spark of their ardor or immortalize the timeless beauty of their beloved.

Such was the case with Romanian sculptor Constantin Brancusi (1876-1957), who met a Hungarian art student named Margit Pogany in 1910 when both were starving ex-pats living in Paris. Though their liaison was brief, Brancusi would spend more than 20 years trying to recreate her essence in a series of busts called Mademoiselle Pogany that featured his muse’s doe-like eyes cradled in her hands.

Working first in bronze and then polished marble, it took the obsessive sculptor two years to complete the first 18″ bust (below) in 1913 and another 20 to create the rest of the 5-piece series.

Brancusi’s obsession became the stuff of art world legend, and his surreal, egg-shaped Mademoiselle Pogany busts became one of the most celebrated and familiar works of 20th Century sculpture. (You can still spend hundreds of dollars on eBay just for plaster knockoffs of the masterpiece.) In his homeland, where the government recently put a $100 million valuation on a single Pogany bust, Brancusi remains a towering cultural and political icon.

Now, more than 100 years later, Mademoiselle Pogany has been given new life — and new meaning — through an inspired lingerie collection from the independent Romanian label Ludique.

For Ruxandra Gheorghe, Ludique’s founder, the project was both a personal and nationalistic statement, one imbued with her allegiance to Romania and her devotion to Brancusi.

“I extract my creative sap from Romanian art, mythology and traditional costumes,” Ruxandra told Lingerie Talk. “I am mirroring the past while looking straight to the future … reinventing the traditional in an innovative manner.”

Ludique is known for combining sensual shapes with graphic, geometric patterns. And if you’re not an art lover, you might miss some of the brand’s cultural references.

For example, in her 2011 debut collection (below), Ruxandra created a stacked-diamond pattern based on Brancusi’s post-war monument, The Endless Column — a tribute to Romania’s war dead and probably the most emotionally powerful artwork ever created in that country. Her next collection was based on the mythical fairies, called Ielele, from Romanian folklore.

In Brancusi’s Mademoiselle Pogany sculptures, Ruxandra saw something universal — the sensual essence of every woman.

“I wanted to bring to light the milady, the modern courtesan, the muse in every woman,” she said. “Pogany was one of the great passions of Brancusi … and I see it as a tribute to femininity that is precious, tough and intimate. Therefore I’ve created the lingerie, as I see it, for the Mademoiselle Pogany in each woman.”

To realize that vision, she mixes delicate fabrics and geometric cutouts, with plenty of criss-crossing elastic straps that serve to define and accentuate a woman’s curves.

“This collection incites the feminine spirit to cherish and reveal her own sensuality,” Ruxandra said, “and sustains the affirmation of femininity with versatile lingerie pieces that can be worn in privacy and also as outerwear.”

In the ambitious, theatrical photo campaign that accompanies the new collection, Mme Pogany is shown as an alluring, royal figure complete with an elaborate tiara-like headpiece created for the shoot by Romanian artist Mioara Fulga. Veiled in sheer tulle and swaddled in velvet, silk and lace, this depiction of Pogany is both sensuous and mysterious — and a little decadent.

That too, is deliberate, since it’s an image that conveys Ludique‘s essence as a brand, Ruxandra said.

“Ludique is not just lingerie,” she said. “It is a state of mind, a second skin which veils the body, a deserved indulgence, an empowering garment like a sensual affirmation that makes women feel good in their body.”

The Mademoiselle Pogany collection includes bodysuits, bras and bikini briefs and high-waisted briefs. In North America, it will be available soon through Bella Bella Boutique.

Below we have images from the promo campaign for the collection, followed by several styles from the Ludique lookbook.