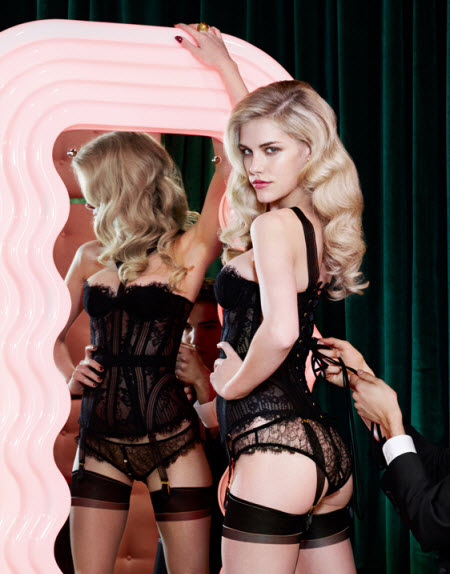 You’re probably familiar with that real estate term, which refers to the practice of painting, decorating and generally sprucing up your property to make it more appealing to prospective buyers.

Whatever’s going on in the AP boardroom, there’s an eye-popping show happening in the front of the shop that should make investors take notice.

AP’s fall collection is built around the theme of “Le Salon” and four personality types that inhabit it — The Starlette, The Showgirl, the Belle de Nuit and La Demoiselle.

Agent Provocateur has never been shy about its francophile fixation, but this may be as close as they’ve ever come to a modern update of classic Parisian boudoir wear.

There are several style ranges in each of the four “personalities” of Le Salon, some of which (like the Fione set in the main photo above) aren’t yet on sale. And, like most AP seasonal collections, its a visual and tactile buffet offering a staggering array of looks that will tempt coquettes and courtesans alike.

The standouts? The Starlette grouping’s shimmering gold lamé Yoshie range and lace-and-chiffon Chii Chi dress; the powerful black satin Patti range in the La Demoiselle group; and the floral lace Denver wrap in the Belle de Nuit set, which somehow is described as a “gown”.

It’s worth noting that this is the second consecutive collection from Agent Provocateur that adopts a decidely retrograde approach to its depiction of women. Last season, AP shot its models doing chores in a kitchen, and this time they’re the main attraction in Parisian strip club or cathouse. It’s a long way from the self-empowered heroines who have been a fixture in previous marketing campaigns, and some women will take offense at the objectification.

That being said, numbers don’t lie and Agent Provocateur has enjoyed robust growth in the past couple of years while results across much of the lingerie industry have been moribund. Maybe that’s just what happens when a girl dresses herself up for sale .