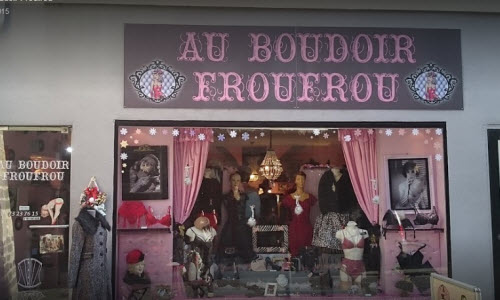 Passionate about the rock’n roll scene, Christine Bonnetaud decided to embark on creation by opening the first retro lingerie shop in Clermont-Ferrand.Inspired by the Hollywood celebrities of the 50s, Au Boudoir Froufrou invites its customers to enter its world shifted.

Installed in the region for a number of years, Christine Bonnetaud was seduced by the Auvergne. “I think Clermont-Ferrand is a very interesting city. It is a city that moves and drains from the passage, which is essential to build a project like mine. ”

Aware that no Clermont shop sells off-the-shelf underwear and foreign brands, Christine Bonnetaud decided to open her own retro lingerie shop, inspired by the Hollywood actresses of the 50’s and young London designers. To go to the end of her idea, she has also arranged the store in the form of boudoir. “The shop is often taken pictures, I deduce that it pleases and that it will be can be copied. The decoration and the universe of the store decomplex the act of purchase, so the men dare to enter and help their wife to choose their underwear. The collections present in the store are retro and rock’n roll, without being vulgar “.

Little known in the Clermont area, Au Boudoir Froufrou organizes a number of lingerie shows to present the collections, is present in several salons (lingerie show, chocolate fair), advertises in free magazines, communicates via its facebook page and Built a website for the school year.