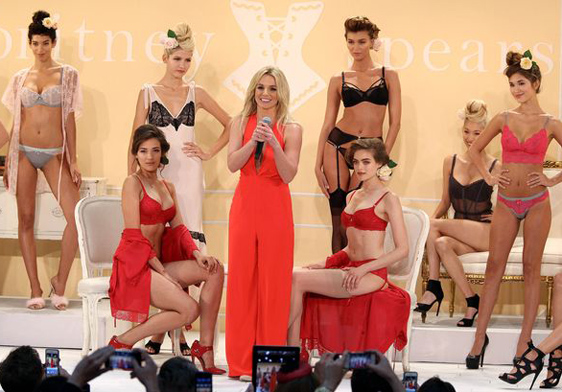 Not usually the first words that come to mind when one thinks of Britney Spears.

But the unveiling of the Intimate Britney Spears lingerie brand in New York yesterday shows how far America’s former wild child has come in cleaning up her act.

What hasn’t changed is Britney’s ability to fascinate — and draw a crowd. About 200 fashion media and retail buyers turned out for the polished presentation, which included a brief (and fully clothed) appearance from the pop princess herself.

And as if it underscore Brit’s transformation from one-time bad girl to global brand ambassador, the Fashion Week launch was staged in the stately, iconic New York Public Library — about as symbolically far from the Vegas hotel stage, where she’s midway through a two-year performance gig at Planet Hollywood, as you can get.

Created in partnership with the respected Scandinavian brand Change Lingerie, the sexy-but-never-tacky collection also debuted yesterday on the brand’s webshop. Other retailers will get on board soon, and e-commerce giant Bare Necessities is already taking pre-orders. Meanwhile, Britney herself is taking her lingerie show on the road, with public launches later this month in London and continental Europe.

As for the collection itself, it’s also not what many people might have expected when they first heard that Britney was finally putting her name and considerable brand power behind a lingerie line. A press release from Bare Necessities says the collection “bring[s] her well-known, seductive performances to life,” but that’s a bit of a stretch. There are no sequined bodysuits here, no fetish harnesses, no peekaboo bras or slinky string thongs.

Instead, this is a middle-of-the-road lingerie and loungewear assortment for grown-ups, not sweaty sex kittens. You won’t find anything like what Britney wears for her Vegas shows although, ironically, the collection includes a basics range of jersey sweat tops and pants that you know she would wear to the gym or while schlepping the kids around town.

The lingerie pieces are feminine but also conservative, sexy but never risqué. Britney has found the sweet spot in American lingerie today — familiar, risk-free, everyday styles that will have broad appeal among women from 25-50 without pushing any fashion boundaries.

It’s a big collection with 10 lingerie style ranges as well as the lounge/sleep grouping, and customers will appreciate its affordability and the generous size range (up to a J cup).

But there are still a few wrinkles to iron out with the new brand. For example, there’s a “sleepwear” section on the IBS website that includes no sleep options other than sweats and jersey tanks (the very appealing PJ set shown above isn’t included in the items for sale); and there’s a short-sleeve “sweatshirt hoody” that doesn’t have a hood (it’s basically a T-shirt). There’s also an unfortunate misspelling in the name of one of the flower-themed style ranges on the website, which will surely (?) be corrected immediately.

Britney’s team has also made some questionable choices when it comes to marketing the new brand. The label’s logo features an illustration of a corset, but there are no corsets in the IBS collection (just two bustiers). But the biggest head-scratcher is the heavily photoshopped photo campaign, which tries to create the illusion of a gauzy, backlit Southern belle’s boudoir but ends up making the 32-year-old Britney look like a 20-year-old Jessica Simpson clone.

Britney models her brand’s lingerie in a series of come-on videos on the company website but, in a display of uncharacteristic public modesty, appeared at her brand launch yesterday in one-piece jumpsuit and left all the showmanship to a backup squad of professional models.

Which, in a way, sums up the big question that Britney and her partners will face regarding the new label — why they chose to play it safe and tone down the sex appeal, especially given the highly eroticized image that has been such a key part of Britney’s public persona, and appeal, throughout her career.

The public’s enduring fascination with the former American sweetheart who became the biggest celebrity of the digital age will generate a wave of worldwide media attention that most new lingerie labels could only dream of (she even got a shout-out on Jimmy Fallon last night). But will the star’s fans embrace the more mature, modest Britney and her new venture?

Name recognition and fan loyalty should give the new label a boost, but many of her followers were probably hoping for more of a show.