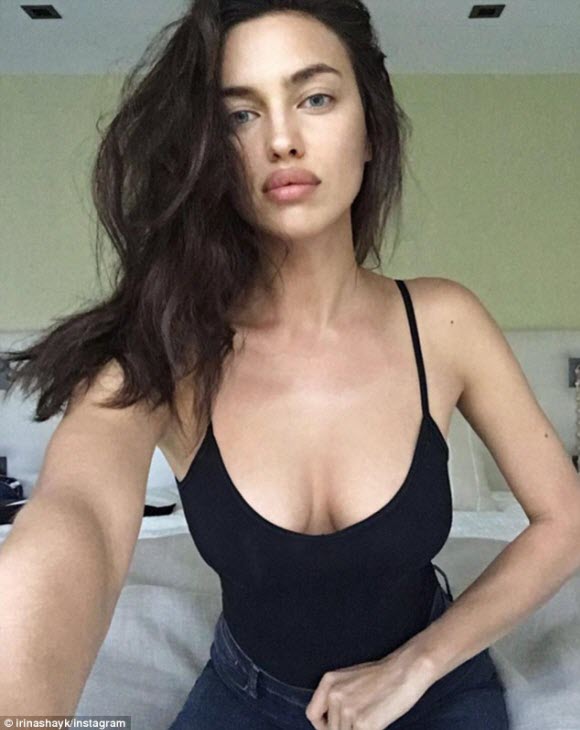 She’s one of the most desirable women in the world.

Irina Shayk, 30, showed why she’s held in such high regard, posting a stunningly busty snap on Instagram on Thursday.

The Russian beauty flaunted her impressive assets and enviably slim waistline in a racy Intimissi body suit and Givenchy jeans.

The model’s luscious brunette locks cascaded messily over her shoulders and were full of volume as she sat perched on the end of a large bed.

Her famously plump lips were thicker than ever as she brought them together in a subtle pout.

The natural beauty’s blue peepers looked lustrous as she gazed into the camera, while her unblemished complexion emanated a healthy glow.

Irina was recently pictured in the crowd at Rihanna’s Barclays Centre gig in Brooklyn, alongside the likes of John Mayer, Jaden Smith and Jonathan Cheban.

And it seemed that the model was definitely feeling the good time vibes, as she was seen moving and grooving along to the set.

The Russian-born beauty – who is currently dating Hollywood heartthrob Bradley Cooper – was at the gig with her BFF Naomi Campbell, and was clearly in the mood for a party.

Laughing and waving her arms around in the air, Irina certainly appeared to be having a blast as Rihanna strutted her stuff on-stage.

Earlier this month, Bradley and Irina were seen enjoying a romantic stroll around Paris, though the American Hustle actor’s sights were fixated on his supermodel beau as oppose to the city’s architectural beauty.

The 41-year-old actor couldn’t take his eyes off of his girlfriend as they sauntered around the French capital – which was hosting its star-studded Fashion Week – hand-in-hand.