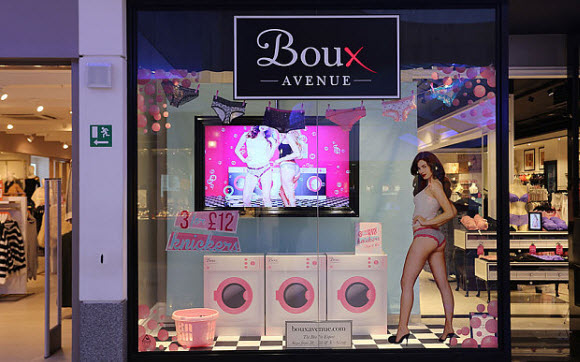 Boux Avenue, an underwear chain owned by the Cypriot-born British retail magnate, 56, was forced to apologise after a complaint over the controversial display.

At least one woman reported being offended by a life-sized poster of a woman, dressed in just pink knickers and a grey top, in the window next to three washing machines. Two scantily-dressed women also appear on a television screen appearing to wash clothes.

The store, in Brighton, East Sussex, has now “apologised for any offence caused” and will remove the display and not repeat it across its chain of national stores.

Brighton student Sarah Derby, 23, made a complaint after spotting the shop window.

She said: “I understand sex sells, but this window displays a picture of women as sexualised domestic beings. They seem to be saying that to be sexy you also need to be able to do the laundry.

“This isn’t about being prudish but sexuality shouldn’t be linked with domesticity. The implications of women as being nothing more than sexualised domestic beings reinforces anachronistic gender roles of 50 plus years ago.

“The fact that it is in such a prominent location at the front of the store suggests the minds behind the display put no thought to the implications and are indeed proud to display such ill-thought and outdated ideology.”

In her full complaint to the company, Miss Derby questioned why the firm had not chosen to display attractive women in the House of Commons, laboratories or succeeding at sport.

She added that the display “undermines the respectable and admirable academic, scientific and physical achievements of women”.

However, other shoppers questioned if the display caused any harm.

One woman said: “I think there are probably more important things to get offended by than this. Surely people would be just as offended if they advertised their frilly knickers with MPs in front of the House of Commons.”

A Boux Avenue spokeswoman said: “We were very concerned to hear of the complaint with regards to one of our window displays in the Brighton store.

“At Boux Avenue we pride ourselves on being a customer centric brand and we attempt to create fun and engaging window displays that we are confident our customers will enjoy.

“The window as designed by our creative team, was not intended to cause offence but we can see how the concept could be interpreted and have taken the feedback on board.

“The campaign is due to come to an end this week and this is not a creative that we will be repeating. We apologise for any offence caused, as this was by no means the effect intended.”

Mr Paphitis, who has an estimated net worth of £210 million, launched Boux Avenue in 2011 after selling his stake in lingerie brand La Senza for £100 million in 2006.

The former Millwall FC chairman has now opened 28 Boux Avenue stores across the UK. He is the owner of stationery chain Ryman and homewares specialist Robert Dyas.