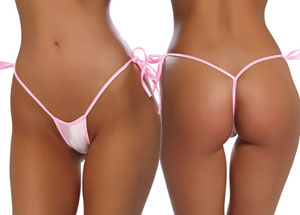 A G-string (alternatively gee-string or gee string) is a type of thong underwear or swimsuit, a narrow piece of cloth, leather, or plastic, that covers or holds the genitals, passes between the buttocks, and is attached to a band around the hips, worn as swimwear or underwear mostly by women, but also by men.

The two terms G-string and thong are sometimes used interchangeably; however, technically they refer to different pieces of clothing. A g-string is sometimes worn on beaches. G-strings are also worn by some go-go dancers.

The origin of the term “G-string” is obscure. Since the 19th century, the term geestring referred to the string which held the loincloth of Native Americans and later referred to the narrow loincloth itself. William Safire in his Ode on a G-String quoted the usage of the word “G-string” for loincloth by Harper’s Magazine 15 years after John Hanson Beadle’s 1877 usage and suggested that the magazine confused the word with the musical term G-string (i.e., the string for the G note). With the notion that the G-string is the narrowest string on the violin; though this is reported as not the case as the E string is the narrowest.

Safire also mentions the opinion of linguist Robert Hendrickson that G (or gee) stands for groin, which was a taboo word at the time.