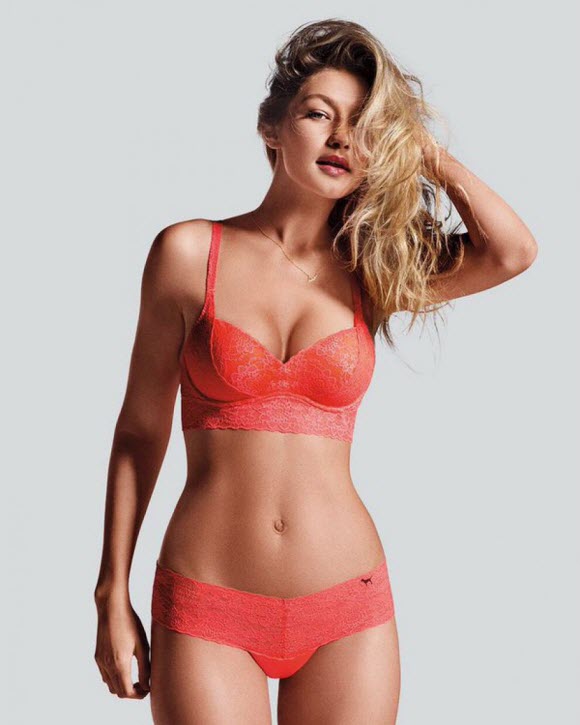 She was named one of the 12 rookies in Sports Illustrated‘s annual swimsuit issue in 2014. She has also appeared on the reality television series The Real Housewives of Beverly Hills, in which her mother Yolanda Foster has starred since the third season in 2012.

Hadid was born and raised in Los Angeles, the daughter of real-estate developer Mohamed Hadid and former modelYolanda Foster. Her mother is Dutch and her father is Palestinian. Hadid has two younger siblings, Bella, who is also a model, and a brother, Anwar. She has two older half-sisters, Marielle and Alana, on her father’s side and five stepsisters from her stepfather. Following her parents’ divorce, her mother married music producer David Foster. In 2013, Hadid graduated from Malibu High School, where she was captain of the varsity volleyball team as well as a competitive horseback rider.

Following high school, she moved to New York City to focus on her studies and modeling career. Hadid studied at The New School beginning fall 2013.

Hadid’s modelling career started when she was two years old after she was discovered by Paul Marciano, of Guess. She started modelling with Baby Guess before she stopped to concentrate on school. Hadid eventually returned to modeling, signing with IMG Models in 2011.She resumed working with Marciano, and was named the face of a Guess campaign in 2012. She has shot three campaigns with Guess as an adult.

In February 2014, Hadid made her New York Fashion Week debut walking for Desigual’s show.Hadid has graced magazine covers including Schön!,Vogue (Spain, Australia, Brazil, the Netherlands), and Teen Vogue as well as Elle Canada and Harper’s Bazaar Malaysia. Hadid has also shot editorials for VMAN, Elle, Grazia, Cleo,Vogue,Sports Illustrated, and Paper magazine. She was on the cover of Galore magazine and Carine Roitfeld’s CR Fashion Bookin 2014. Hadid’s sister Bella is also a model, and the two sisters have been working together on some modelling appearances.

Hadid played Australian singer Cody Simpson’s love interest in the video for his song “Surfboard” which was released on April 14, 2014. She played the love interest of singer Miguel in the music video for “Simplethings”, released May 29, 2014. On July 15, 2014, she starred alongside actor and model Patrick Schwarzenegger in fashion designer Tom Ford’s Eyewear autumn/winter campaign. She co-hosted the Daily Front Row’s Fashion Media Awards that was held in New York City on September 5, 2014.

Hadid appeared in the 2015 Pirelli calendar. In January 2015, she was named a Maybelline brand ambassador. By May 2015, Hadid had walked for designers including Marc Jacobs, Chanel, Michael Kors, Jean Paul Gaultier, and Max Mara. In December 2015, she made her first appearance in the Victoria’s Secret Fashion Show.

Hadid was in a relationship with singer Cody Simpson from 2013 to May 2015. In October 2015, she and singer Joe Jonas were photographed on dates together. Since November 2015, she has been seen on dates with singer Zayn Malik.