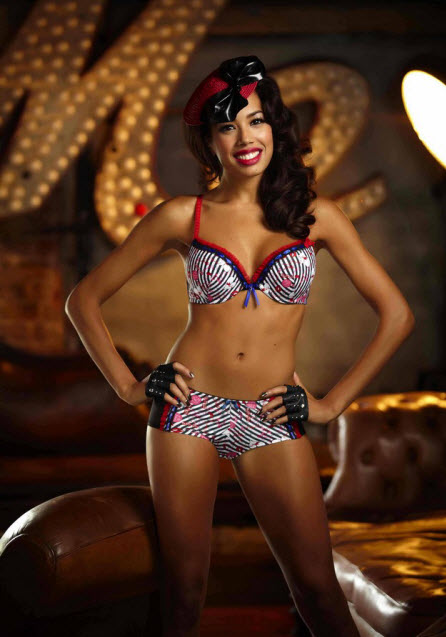 Jade Louise Ewen (born 24 January 1988) is an English singer, songwriter, actress and member of the Sugababes.

Ewen began her singing career in a girl group named Trinity Stone signed to Sony BMG in 2005, but they disbanded in 2007 with no album released. In 2009, she represented the UK at the 2009 Eurovision Song Contest performing the Andrew Lloyd Webber penned “It’s My Time” after winning the UK national selection. She achieved fifth place, making her the most successful British Eurovision act since 2002.

Ewen replaced Keisha Buchanan of the Sugababes in September 2009 and has since attained two UK top-ten singles with the group and one album Sweet 7; the band have been on hiatus since 2011 with a new album planned for release some point in 2014.

Ewen was born and brought up in Plaistow, London, to a Jamaican mother, Carol and a Scottish-Sicilian father, Trevor. Trevor is blind and partially deaf, while Carol is partially blind. Because of her parents’ disabilities, Ewen is a carer to both her parents and two younger siblings, Shereen and Kiel. She attended Brampton Manor Academy but then received a scholarship to the Sylvia Young Theatre School. As a student at Sylvia, she appeared in The Bill, Casualty and Mr. Harvey Lights a Candle.Ewen also auditioned for and won the part of Nala in The Lion King at the West End at the age of twelve.

Ewen appeared in the children’s dance DVD, entitled How To Dance. She also featured briefly in the video for pop rock band Busted’s “What I Go to School For”. Between 2003 and 2004 she appeared in the Australian series Out There. In 2005, Ewen became a member of the girl group Trinity Stone which was signed to Sony BMG. The group disbanded in 2007.She later recorded with rapper Kwamé, who was impressed with her work on MySpace.She released a digital single, “Got You” in 2008 under Kwame’s Make Noise label. Ewen co-wrote the song “A Little Bit” for the girl group Booty Luv and also “Let Me Be Me” for Jessica Mauboy. In early 2009, Ewen acted in the first episode of the series, Myths.

In January 2009, Ewen was approached and participated in the UK national selection for the Eurovision Song Contest 2009. She was eventually selected to represent the UK with the song “It’s My Time” composed by Andrew Lloyd Webber who accompanied her on piano onstage.Ewen finished in fifth place at Eurovision, the highest placing for the UK since 2002. Having already signed with Polydor Records before the Eurovision selection, Ewen began working on her debut album.

In September 2009, Ewen joined the Sugababes as the replacement for Keisha Buchanan. While her single, “My Man” had been released, promotional activities for it were cancelled. Released in the week that she joined the Sugababes, the single debuted at #35 on the UK Singles Chart. In an interview with the BBC, Ewen confirmed her commitment to the Sugababes as her main priority and that her solo album was put on hold. Ewen had not met the remaining members of the Sugababes until two days before the video shoot for their single “About a Girl” in Los Angeles. She had been flown there without being notified that she would be replacing Buchanan. “About a Girl” later debuted at number eight in the UK.Sweet 7 was released in early 2010 after multiple delays from late 2009, and charted at 14 on the UK Albums Chart. The second single to feature Ewen’s vocals, “Wear My Kiss”, peaked at number 7 in the UK.

The Sugababes began recording an eighth studio album in April 2010. In late 2010, Ewen became the face of Miss Ultimo lingerie. In 2011, the group and their management Crown Talent & Media Group left their record label of ten years, Island Records, for a new three-album distribution deal with Sony Music’s RCA Records, with Crown Talent & Media Group as the acting record-label. Their promotional single under the new label, “Freedom”, was released for free on 25 September 2011. In November 2011, Ewen flew to Australia to appear on I’m a Celebrity, Get Me Out of Here Now!. The group began a hiatus in 2012 to work on solo projects. On 22 June 2012, Berrabah revealed that the current Sugababes line-up is planning to release new music at “the end of next year”.On 25 June 2012, Range confirmed that the current line-up is working on new music, but has no plans to release any material in 2012.

In July 2012, Jade confirmed that she’d been working on solo material and the Sugababes’ next album throughout the year.

On 2 January 2013, Ewen was revealed as one of the celebrity contestants to compete in Olympic diver Tom Daley’s new diving show Splash!.She was the first to be eliminated from the competition. On 15 March 2013, Ewen confirmed the band will record new music “before the end of the year”, stating: “I think we will probably come back together again at the end of the year. There will definitely be more recording but, there is no release date anytime soon.” In June 2013, Ewen released a new music single called “Fly” featuring music act Lost Witness. On August 1, 2013 she revealed the Sugababes are no longer recording in the studio together, stating the group are “pretty much done”, as well as confirming she’d started work on her debut solo album.