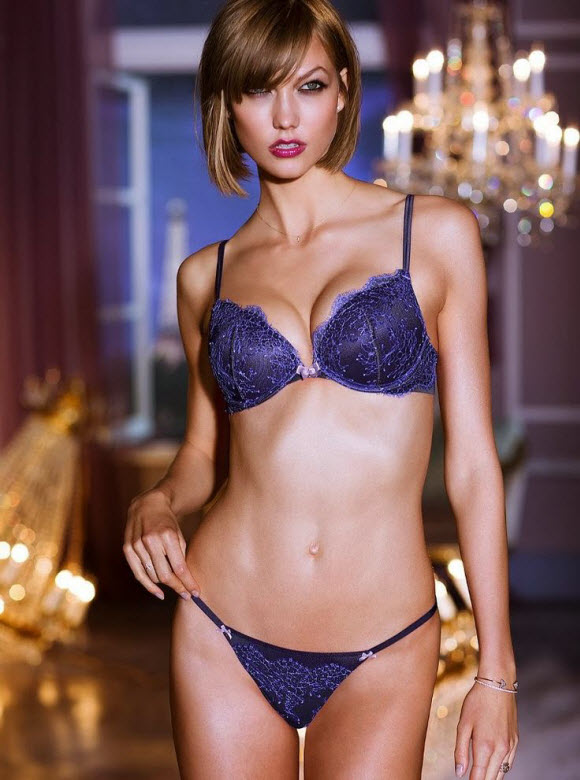 Karlie Elizabeth Kloss (born August 3, 1992) is an American fashion lingerie model and entrepreneur. She was a Victoria’s Secret Angel from 2011 to 2014.

Kloss was born in Chicago, Illinois. She is the daughter of Tracy (née Fares), a freelance art director, and Kurt Kloss, an emergency physician. Her family has Danish and German roots. She has three sisters, Kristine, and twins Kimberly and Kariann. She moved to St. Louis, with her family, in 1994. Kloss has called her classical ballet training “a beautiful thing” that taught her how to move in the modeling world and was a great training ground for her runway walk. Kloss was “discovered at a local benefit runway show”.

In 2006, at the age of 14, Kloss posed for a cover and editorial shoot for the June issue of Scene Magazine in Chicago with Photographer David Leslie Anthony, in an editorial spread titled “Almost Famous”. Elite Chicago (now Factor Women) then forwarded these tear sheets to Elite NY, who then brought Kloss to New York.

One of her first modelling stints was for Abercrombie kids when she posed for the brand’s photography shot by Bruce Weber.In January 2008 she left Elite and signed with NEXT Model Management. She ended up walking 31 runways in New York Fashion Week notably, closing for Marc Jacobs, opening Carolina Herrera, and occupying both spots at Doo.Ri. After New York, she walked 20 shows in Milan, and 13 in Paris for the fall 2008 collections, with 64 shows in a single season. Kloss found herself in the middle of a legal dispute when her former agency Elite Model Management sued NEXT Model Management for allegedly stealing its young star by offering her “improper compensation” to sign. Elite felt they were responsible for launching her career and booked much work for her. The case was eventually settled out of court.

After four years of being represented by Next Model Management, Kloss is now signed with IMG Models. “Karlie has an immense and loyal following, and we welcome the opportunity to help expand her relationships through endorsements as well as our global network that reaches beyond fashion”, said Ivan Bart, IMG Models’ senior vice president and managing director.

Kloss, labeled her famed runway walk a “moody gait”. Molly Sims, whom she considers a mentor, told New York she thinks Kloss will still “do well at 30” because of her “classic look”.

She has ventured into TV when she appeared in Season Four, Episode 1 of Gossip Girl as herself. She became a muse for fashion designer John Galliano and has appeared in Dior and John Galliano campaigns and opened both shows, Christian Dior Haute Couture and Dior resort shows from spring/summer 2010. In the spring/summer 2011 season, she opened ten shows and closed eight.

Her runway walk, one of the most unusual, is often described as powerful. In February 2011, supermodel Tyra Banks stated that Kloss was one of her favorite models because of her “unique, atypical beauty”.

In 2011, Kloss renewed her contract with Christian Dior for the third season in a row. Life magazine photographed Kloss for the cover of a special print issue handed out during New York Fashion Week in September 2011. The photo story inside the issue was photographed during the summer of 2011 and shows Kloss at the couture shows in Paris, in New York City, and in Saint Louis, her hometown. The same year, she made her debut in the Victoria’s Secret Fashion Show.

In 2012, Kloss was featured on the September covers of British Vogue, Japanese Vogue, Harper’s Bazaar Russia, and Numéro. She appeared in the campaign ads of Juicy Couture, Stefanel, Elie Saab, and Jean Paul Gaultier. She co-hosted with the revival of the MTV series House of Style with fellow model Joan Smalls. She also appeared in that year’s Victoria’s Secret Fashion Show. Just before the Victoria’s Secret Fashion in 2012, Karlie cut her long hair into a bob which is famously called the “Karlie”.

In 2013, Kloss was the face of Donna Karan, Lacoste, and Lanvin campaigns. Kloss worked with Victoria’s Secret on their 2013 summer swimwear video. She was also the red carpet host of the 2013 MTV Movie Awards pre-show. In April, Kloss starred alongside Daria Strokous, Monika Jagaciak and Iris Strubegger in Louis Vuitton’s Alma bag campaign.

In 2013, Kloss was named as one of the new ambassadors for Coach, Inc. and stars in the accessory maker’s fall 2013 campaign.

In 2014, Kloss was the face of Jean Paul Gaultier, Nike, Donna Karan, Lancaster, and the Chanel Coco Noir fragrance campaigns. She also collaborated with Frame Denim to design the Forever Karlie jeans collection. In summer 2014, Karlie worked with Warby Parker to design the Karlie Kloss x Warby Parker eyewear line, proceeds of which benefited Edible Schoolyard NYC. In September 2014, after many speculations, L’Oreal Paris officially announced that they have signed Karlie to be the newest face. In the September 2014 issue of American Vogue, she was featured on the cover with Joan Smalls, Cara Delevingne, Arizona Muse, Edie Campbell, Imaan Hammam, Fei Fei Sun, Vanessa Axente, and Andreea Diaconu as “The Instagirls!”

In 2015, Kloss and one of her best friends, Taylor Swift, covered the March issue of American Vogue together. Kloss also starred in the music video for Chic’s “I’ll Be There”, which was directed by Inez van Lamsweerde and Vinoodh Matadin. Kloss also portrayed the role of “Knockout”[50] in the music video for Swift’s song “Bad Blood” which premiered at the 2015 Billboard Music Awards.

Kloss appeared in several video segments during Taylor Swift’s 1989 World Tour and appeared live on stage with Swift at the performance of June 27, 2015 at London’s Hyde Park, as well as on July 11, 2015, at the MetLife Stadium in East Rutherford, New Jersey.

On May 24, 2016, Kloss was named the new face of Swarovski replacing another former Victoria’s Secret alum Miranda Kerr. She is contracted to be the face for the next 2 years, as the brand is hoping to reach out to the next generation.

On April 21, 2017, she appeared as a correspondent on the Netflix series Bill Nye Saves the World.

Kloss was featured in Vogue‘s March 2017 issue. The spread was criticized by some as a form of cultural appropriation as Kloss appeared styled as a geisha.

Models.com have said that Kloss… represents the gold standard of modelling – a girl with the look, the poise, and the drive to take things to the next level.

Kloss is a computer programming activist; in April 2015, she partnered with Flatiron School and Code.org to offer a scholarship named Kode with Klossy for young girls interested in computer science and software engineering. In collaboration with Momofuku Milk Bar, she created a special recipe called Karlie’s Kookies, which she sold in DKNY Soho during Fashion’s Night Out in New York City, with proceeds benefiting hungry children around the world (through FEED Projects). She calls it a “Perfect 10 Kookie”, because for every tin of cookies that is sold, 10 meals will be donated to starving children all over the world.

Kloss is a close friend of Taylor Swift, and appeared as “Knockout” in the singer’s music video for the single “Bad Blood” in May 2015. She and Swift appeared together on the March 2015 cover of Vogue with an accompanying article and photo spread. She is also a close friend of filmmaker Casey Neistat, who assisted her in starting up on YouTube. Kloss is the godmother of model Jourdan Dunn’s son.

She has been dating businessman and investor Joshua Kushner since 2012