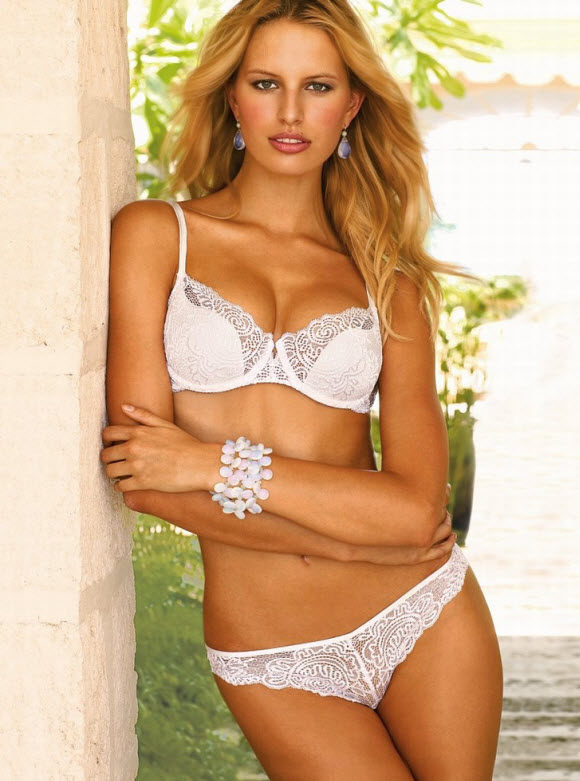 Mario Testino praised the “proportions of her body and her face, as well as her energy level”, which he said “ma[de] her a model who could fit almost into any moment”. Vogue editor Anna Wintour called her the “next supermodel”.

Kurková is among the world’s top-earning models, having earned an estimated $5 million in the year 2007. She placed 6th in theForbes annual list of the highest-earning models.

Karolína Kurková was born in Děčín, Czechoslovakia, to Josef Kurka, a Czech basketball player, and a Slovak mother. While Kurková was young, she was made fun of for her height. But after a friend sent photos of Kurková to an agency in Prague, at age 15, she landed a runway appearance, as well as gigs for commercial and print advertising. She later traveled to Milan to gain more experience and signed a modeling contract with Miuccia Prada.

In September 1999, Kurková appeared in the American edition of fashion and lifestyle magazine Vogue, and, after moving to New York City at the age of 17, graced the cover of the February 2001 edition.

Kurková was named “Model of the Year” at the 2002 VH1/Vogue Fashion Awards, in part for her work ethic, having worked 23 weeks straight. Photographed by Steven Meisel, she was presented on the September 2004 cover of American Vogue as one of the “Models of the Moment”.

Kurková has appeared on over 25 Vogue magazine covers internationally, including the French, Italian, UK, German, Russian, Greek, and Korean editions, and has also appeared in international editions of Elle, Vanity Fair, and The Face. She has worked with noted fashion photographers like Steven Klein, Mario Sorrenti, and Mario Testino.

After being contracted as a Victoria’s Secret Angel in 2005, she was featured in the 2006 Victoria’s Secret Fashion Show, showcasing the $6.5 million “Hearts On Fire” Fantasy Bra decked with almost 2,000 diamonds weighing 800 carats (160 g) with a centerpiece diamond brooch weighing 10 carats (2.0 g). As an Angel, she received a star on the Hollywood “Walk of Fame” prior to the 2007 Victoria’s Secret Fashion Show, appeared on the February 2008 cover of Esquire, re-creating the classic 1966 Angie Dickinson cover for the magazine’s 75th anniversary, and was chosen as part of People magazine’s 100 most beautiful people in the world. In December 2007, she was featured in print ads for Dell.

In the last Cía Marítima fashion show, Kurková’s unexpectedly heavier physique brought criticism from the Brazilian press as having “too much back fat, love handles and cellulite”. Kurková has a smooth indentation in place of a navel due to surgery she had as an infant,and photographs are often altered by the addition of an image of a belly button to hide this.

Kurková made her film debut alongside Frankie Muniz, Harvey Keitel, and Amber Valletta in Howard Himelstein’s 2007 coming-of-agedramedy, My Sexiest Year. She played Courtney A. Kreiger / Cover Girl in the live action 2009 G.I. Joe: The Rise of Cobra film. She was a guest judge on the fifteenth season of America’s Next Top Model and fourth season of Germany’s Next Top Model.

She appeared on the 2008 Academy of Country Music Awards along with Dwight Yoakam in presenting the “Top Female Vocalist” award to Carrie Underwood. In September 2010, Karolína guest-starred on NBC’s Chuck season 4 episode, “Chuck Versus the Suitcase”. She played Sofia Stepanova, an enemy spy posing as a supermodel.

Kurková appeared alongside German model Eva Padberg on the reality television show Das perfekte Model, a model casting-show similar to Germany’s Next Top Model. The show aired in spring 2012 on German television broadcast VOX. The show was canceled due to low rating in summer 2012. Kurková made a guest appearance on television series 30 Rock in Season 6, Episode 9 titled “Leap Day” in February 2012.

Kurková appeared as herself in an episode of Person of Interest, in a subplot where the character of Detective Fusco (Kevin Chapman) protects Kurková from Armenian gangsters. The subplot, which is interspersed throughout the episode, takes up less than two minutes of screen time and is played for comic relief. Karolina is also a supermodel coach on OXYGEN’S “The Face”, alongside Naomi Campbell and Coco Rocha.

On 8 January 2009, FoxNews.com reported that Kurková suffered from hypothyroidism, which led to her unusual heavier physique and caused Kurková to be panned by fashion critics, when she walked the runway for Cía Marítima and Victoria’s Secret in June 2008 and November 2008, respectively. In February 2012 at the Council of Fashion Designers of America forum on “A Well Balanced Life”, Kurková spoke about her thyroid problems:

I thought I was going crazy. I was having panic attacks every minute and I didn’t know what was happening, because I’ve been a healthy person. I’ve exercised all my life. I’ve always eaten well and taken care of myself.

In July 2009, she announced she was expecting her first child with her fiancé, Archie Drury. Kurková revealed that Drury had proposed to her while on holiday in Cape Town, South Africa, and they were married before the birth of their son, Tobin Jack Drury Kurka, which occurred on 29 October 2009. On 8 July 2015 Kurkova announced that she and her husband were expecting a second baby. On 12 November 2015, it was announced that Kurkova had given birth to her second son named Noah Lee Drury Kurka.

In March 2006, Kurková received an award from the non-profit organization “Women Together” for her humanitarian work. Kurková was honored for working for the welfare of children through organizations such as “the Beautiful Life Fund”, “Free Arts”, and “Global Youth Action Network”. Kurková received the Atmosphere Magazine Award at theMadrid Planet Hollywood restaurant on 18 December 2003.

Kurkova was named one of the world’s “50 Most Beautiful People” by People Magazine in 2004, and remains the youngest model ever to win “Model of the Year” at the VH1/Vogue Fashion Awards. She received a star on the Hollywood Walk of Fame in 2007.

Kurkova was listed by Forbes as one of the top-earning supermodels in the world. In 2012 she was honored as “Style Icon” at the Vienna Awards for Fashion and Lifestyle.

Karolina also received the GALA Spa Award in the category of “Beauty Idol”, which was awarded by one of Germany’s people magazines. In early 2013 Karolina released her own fragrance in cooperation with LR Health & Beauty Systems, an international operation company. The fragrance cooperation already earned Karolina a nomination at the 2013 Duftstar Awards in the category “Novelties – Lifestyle (Women)”.