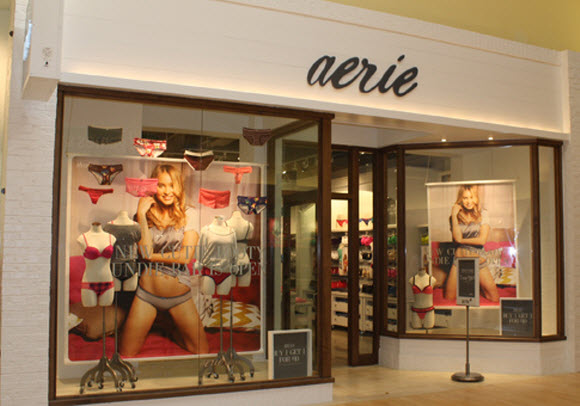 The plus-sized model and National Eating Disorder Association (NEDA) advocate has been modelling with the US brand for one year, starring in its famously unretouched campaigns. She is known for championing body positivity and acceptance.

“Aerie shares my values in uplifting women, building their confidence and embracing the unique qualities that make us all beautiful,” says Lawrence, who has been vocal about encouraging natural beauty on her social media accounts and fashion and beauty site RunwayRiot.

“I got told I wasn’t good enough and I could never make it and then Aerie told me I was beautiful because I was me,” she explains in a new video. “You don’t need to be retouched because the real you is beautiful.”

Since the launch of its #AerieReal unairbrushed campaign concept in 2014, Aerie has featured Emma Roberts in an unretouched intimates campaign and partnered with Gray Malin to shoot a grand-scale unretouched selfie atop Miami Beach, featuring hundreds of real women in Aerie swimwear.

Lawrence’s new role will see her put in appearances at the brand’s upcoming pop-up truck touring US colleges February 28 – March 20, 2016, in stand-alone Aerie stores to meet and greet customers and at brand events nationwide to bring exciting experiences directly to Aerie girls. She will also share her fitness and lifestyle tips on www.aerie.com.

American Eagle Outfitters-owned Aerie, which offers “bras, undies, swim and more for every girl” and has sworn off using supermodels in its campaigns, is just the latest in a long line of brands shunning Photoshop. Last December fashion label & Other Stories unveiled a headline-grabbing lingerie campaign that featured non-professional models with underarm hair, tattoos and scars and went viral almost immediately. This week, lingerie brand Lane Bryant once again made waves when it unveiled its latest campaign, “This Body”, encouraging women to embrace their bodies and celebrates the female form in all its sizes.