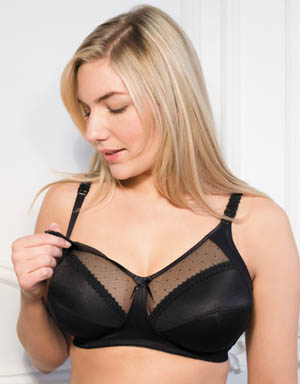 A nursing bra is a specialized brassiere that provides additional support to women who are lactating and permits comfortable breastfeeding without the need to remove the bra.

This is accomplished by specially designed bra cups that include flaps which can be opened with one hand to expose the nipple. The flap is usually held closed with a simple clasp or hook.

Like its sister the maternity bra, a nursing bra is a practical bra designed with fuller cups, comfortable fabrics, and wider shoulder straps for increased comfort. It is designed to support a woman’s increased breast size during lactation and provide ready access to her breasts for nursing. The nursing bra aids breastfeeding by providing flaps or panels that form the bra cup that can be unclipped and folded down or to the side with one hand, exposing the nipple. Some nursing bras are designed so the entire brassiere can be easily pulled upward over the breast to allow an infant to nurse. All nursing bras are designed to allow the mother to easily hold her infant and initiate breastfeeding with a minimum of effort. When in public, this also enables a mother to nurse her infant with minimal effort, minimizing undue or unwanted attention. Nursing bras can be worn under a variety of outer garments, though most nursing mothers choose tops that make it easy for her to place the baby at her nipple. Nursing bras are designed to allow the mother to insert breast pads to adsorb leaking milk between feedings.

Regular bras are not recommended for nursing mothers because they may not offer adequate support or may put pressure on the breasts. It is also more difficult to lift a regular brassiere over the breast when preparing to breastfeed, putting undue pressure on breast tissue, which could increase the risk of clogged milk ducts and infection. Some women are more comfortable wearing camisoles, sleeveless T-shirts, or tank tops over a shelf bra, which leaves the nipple exposed.

Because a woman’s torso usually grows during the pregnancy, her bra band size may grow one or two sizes. An average of 80% of women wear the wrong bra size, and mothers who are preparing to nurse can benefit from a professional bra fitting from a lactation consultant. Women should choose nursing bras with strong side and undercup support and an extra-wide back for optimal support. Nursing bras usually have up to four rows of hook in the rear closure to allow the woman to adjust her band size to a limited extent. However, because a woman’s milk supply continually changes, her breasts will also change size during each day. Experts recommend a soft cup bra made of a blend of cotton and Lycra with cups that stretch to accommodate changes in breast size. Most women buy two or more nursing bras so they can alternate between them. Small-breasted women who don’t usually wear a bra may choose to wear a nursing bra to support their larger breasts or simply to prevent milk from leaking onto their clothes.

A woman’s breasts grow during pregnancy, usually 1 to 2 cup sizes, and potentially several cup sizes. A woman who wore a C cup bra prior to her pregnancy may need to buy an F cup or larger bra while nursing. Once the baby is born and about 50 to 73 hours after birth, the mother will experience her breasts filling with milk (sometimes referred to as “milk coming in”) and at that point changes in the breast happen very quickly. Once lactation begins, the woman’s breasts swell significantly and can feel achy, lumpy and heavy (which is referred to as engorgement). Her breasts may increase again in size, by another 1 or 2 cup sizes, and individual breast size can vary daily or for longer periods depending on how much the infant nurses from each breast. A regular pattern of nursing is usually established after 8-12 weeks, and a woman’s breasts will usually reduce in size, perhaps to about 1 cup size larger than prior to her pregnancy.

A woman’s breasts change considerably during nursing. Depending on how much her breasts change, a woman may find it necessary several weeks after birth to buy additional nursing bras. In the first few weeks of breastfeeding, her bra cup size can change hourly In one exceptional case, the breasts of a woman with virginal breast hypertrophy grew three cup sizes immediately after birth.

To provide proper support and fit, to facilitate nursing, and to avoid engorged breasts or other complications that prevent an infant from nursing effectively, it is important to wear nursing bras that fit well. When a woman wears a bra that is too tight, her milk supply may be reduced, and she can experience plugged milk ducts and an extremely painful infection called mastitis. Mastitis can physically and emotionally affect the mother’s ability to breastfeed.

There are an increasing variety of nursing bras designs, including softcup, underwire, seamless, and lounging styles. Some nursing bras can also serve as a sports bra, allowing a nursing mother to exercise more easily. Some outerwear like tank tops and T-shirts have nursing bras that are built into the garment, and there are also padded and plus-size nursing bras. Some experts advise against wearing an underwire nursing bra because they can restrict the flow of milk and cause mastitis.Most nursing bras have traditionally been white, but manufacturers now offer an increasing selection of colors and styles, including brown, teal, floral, and floral animal prints, and some are accessorized with lace and ribbon.

Different manufacturers use different methods for fastening the flap to the cup, including squeeze, snaps, clasps and hooks. Most nursing bras are designed with cup flaps that fasten at the apex of the bra, at the point where the shoulder straps attach, allowing the mother to simply pulled the top half of the cup down to facilitate access to the nipple. Other designs include flaps that fasten between the cups at the center of the bra, zippers under each cup, and a cross-over design that allows the woman to slip her breast out. Experts recommend that before buying a nursing bra women should try on the bra and experiment with opening the flap with one hand.Some designs utilizing stretchable fabric are suitable for smaller-breasted women, allowing them to pull the entire bra up over the breast to facilitate nursing.

Experts recommend nursing bras that are stretchy, absorbent, and don’t bind the breasts in any way that could interfere with milk flow. Women are recommended to wear a bra that is 100 percent cotton or a cotton-Lycra blend or other stretchy synthetic. It is not necessary to wear a bra at night, although if a woman’s breasts leak excessively, she can wear a loose tanktop at night.

Choosing a functional nursing bra is important to help the mother feel comfortable nursing in various circumstances. In some Western cultures, while nearly nude or nude breasts are displayed openly on beaches and in magazines and movies, there is a taboo against showing breasts in public during breastfeeding.

The first US patent for a bra was granted in 1913 to Mary Phelps Jacob. Her invention is the most widely recognized as the predecessor to the modern bra and consequently the nursing bra.

In October 1932, the S.H. Camp and Company correlated breast size and the degree they sag to letters of the alphabet, A, B, C, and D. Camp’s advertising featured letter-labeled profiles of breasts in the February 1933 issue of Corset and Underwear Review. These procedures were only designed to help women with the then-standard sizes A through D up to a size 38 band size and were not intended to be used for larger-breasted women. In 1937, Warner began to feature cup sizing in its products. Other companies like the Model and Fay-Miss (renamed in 1935 as the Bali Brassiere Company) also began to offer A, B, C and D cups in the late 1930s. Catalog companies continued to use the designations Small, Medium and Large through the 1940s. In the 1930s, Dunlop chemists were able to reliably transform rubber latex into elastic thread. Man-made fibres were quickly adopted by the industry because of their easy-care properties. Since a brassiere must be laundered frequently, this was of great importance. In 1937, Warners added cup sizes (A, B, C and D) to their product line, and other manufacturers gradually followed, but Britain did not take up the American standard until the 1950s. Maidenform introduced brassieres with seamless cups in 1933, but resisted using cup sizes for its products until 1949.

The first patent for a device called a “nursing brassiere” was obtained in 1943 by Albert A. Glasser.After World War II, the post-war baby boom stimulated a large increase in the market for nursing bras. Nursing bras saw little innovation for some time and the market was dominated by larger lingerie companies who would simply add a clip.

The nursing bra industry is very segmented. It includes traditional brassiere manufacturer such as Wonderbra, but more specialty brands like Bravado Designs, which introduced a multi-band/multi-cup sizing system, are competing for market share. Their product is designed to accommodate the needs of women whose breast size can fluctuate up to a single cup size hourly while nursing.Another innovator is Mary Sanchez, who received a patent in 1991 for the one-handed fastening method and variable adjustment of cup size.

For women who need to pump their breast milk, specialized nursing bras are available that allow a woman to pump her breast milk hands-free, similar to a commercial dairy milking machine.