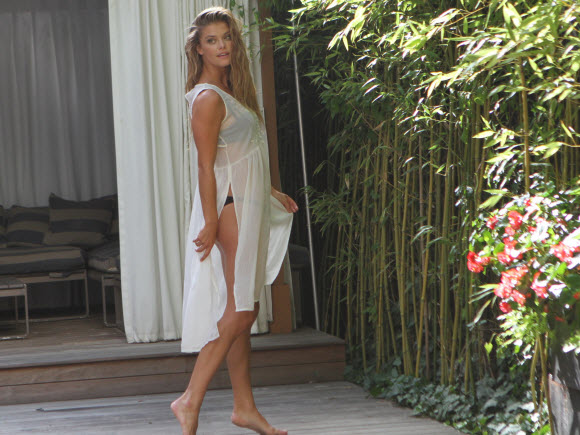 Lingerie company Adore Me is not shy about how it wants to compete with Victoria’s Secret.

The company just took another jab at Victoria’s Secret by using a model that has posed for the brand. Nina Agdal is modeling forAdore Me in a forthcoming campaign for the company’s capsule swimwear collection.

“As Adore Me grows, we’ve found we [have] become a more well known brand, [and] it’s really exciting that very prominent models are looking forward to working with us,” Klapka recently said to Business Insider in a phone interview.

The company also recently tapped curvy model Iskra Lawrence, the spokesmodel for another one of its competitors, lingerie company Aerie.

“[Iskra Lawrence is]  unanimous with body positivity,” Klapka said. “She makes so many women feel confident and proud of their [bodies]. The fact that she’s beautiful as she is, for us, that just aligned with [the] Adore Me brand and what we’re about.”

Adore Me’s mission from the outset has been to unseat Victoria’s Secret on two primary points: price and inclusivity. The company currently sells bras up to 44G and plans to sell up to 46I.

Some companies argue that they don’t sell plus size apparel because it’s more expensive to make, Klapka said.

“When people make those comments — ‘oh, you know it’s more expensive to make these [sizes] … we need to forgo our margins…’ I never really understand [that],” she said, pointing to how companies then miss out on selling to a piece of the population.

(For what it’s worth, it requires separate patterns, and many budding designs aren’t taught how to work with said patterns in school, too — and as lingerie expert and Editor in Chief of popular blog The Lingerie Addict Cora Harrington told Business Insider earlier this year, “the biggest misconception [in the lingerie industry] is, I think, what goes into producing and designing lingerie, especially when you get to higher sizes.”)

Adore Me’s prices for lingerie rival those of fast fashion; through its subscription program, members can get a set of bra and underwear for $39.99 a month. However, its subscription program has been subject to criticism from consumers who claim they were duped into getting a membership, find it difficult to cancel, and who lose their monthly “credits” upon canceling their subscriptions. (Members are charged on the 5th of the month should they fail to select if they want to “shop” or “skip.”) Ad watchdog firm Truth in Advertising has also filed formal complaints against the company.

Klapka appears to be proud of Adore Me’s price point. Though she won’t name names this time, it’s pretty clear who she’s talking about when she says the following: ” There’s a monopoly player that is very dominant in the business — and when you’re a monopoly, you can do whatever you want and whatever you want also means overcharging for your products.”