What Behind The Warrior Chic ? 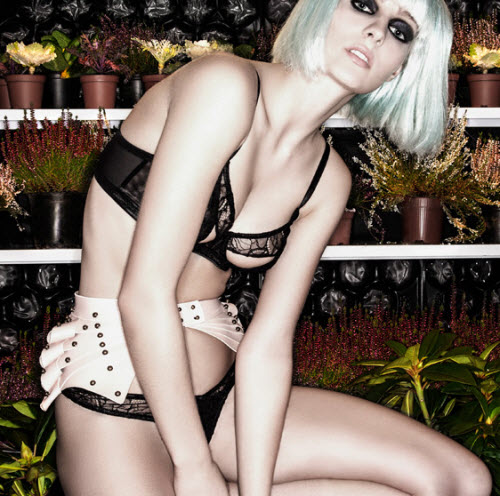 The inspired collaboration between Lascivious and leather wizard Úna Burke — the latest in a long string of collabs between the edgy UK lingerie brand and avante garde artisans — answers a question we’ve wondered about for years: is there a place for Burke’s mind-boggling body armour pieces in the mainstream fashion market?

Lascivious, of course, isn’t anybody’s idea of “mainstream”, but at least it has a strong presence in fashion-forward retail boutiques and customers with real paycheques. Those two things should give Burke the exposure she’s so richly deserved since she exploded onto the art and fashion scenes nearly five years ago.

The award-winning Irish designer creates complex exoskeletal forms from overlapping strips of vegetable-tanned leather and brass grommets. Inspired by such things as medical braces and prosthetics, Burke’s pieces are at once futuristic and medieval — imagine Game of Thrones directed by David Cronenberg and you’ll get the basic aesthetic.

Her early works, after graduating from the London College of Fashion in 2009, attracted constant attention from magazine stylists and earned Burke a following among celebrities and style icons like Rihanna and Lady Gaga.

But to pay the bills at her London studio, where everything is hand-made, she’s had to transform her extreme visions into marketable commodities like belts, handbags, cuffs and harnesses.

Lascivious doesn’t so much adapt Burke’s work as give it a context within the spectrum of wearable lingerie and boudoir accessories. And, as the images above and below reveal, it’s a perfect match: Burke’s warrior-chic belts add a fearsome accent to Lascivious’s modern Supergirl ensembles.

Lascivious offers three colored versions of Burke’s Lady Hips belt, one of her most popular styles, as well as two finger gloves.

The Lascivious Autumn-Winter 2014 collection also sees a return of the brand’s collab with latex designer William Wilde (below), who has contributed more shiny open bras and ouvert briefs to Lascivious’s fetish-friendly catalogue.

The fall collection was inspired by the shiny, armoured exoskeletons of beetles — yes, bugs! — which more than anything should give you a good indication of how far fashion lingerie has evolved in the past few years.

Below is the rest of the fall lookbook which, as always, is as good as any lingerie photo campaign.