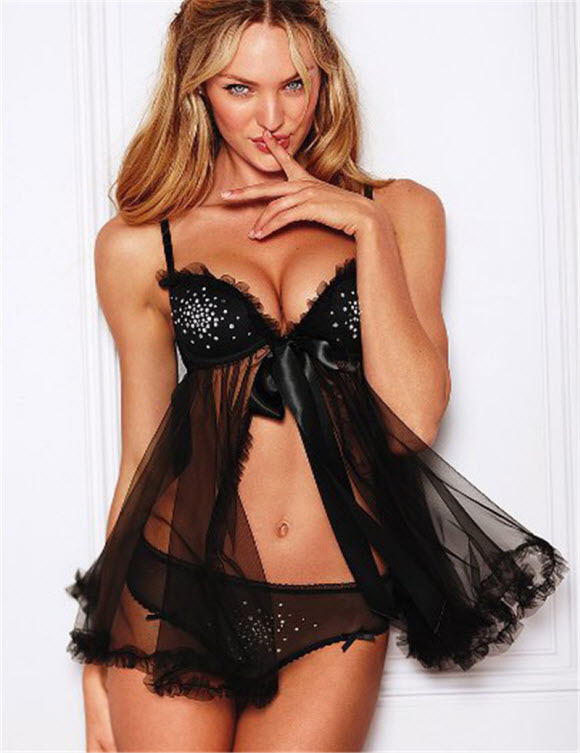 There are a dozen reasons why women love wearing lingerie and there are probably a dozen reasons or more as to why men love to take it off. What colors make a woman feel sensual? What color is it that men adore on women? There are 3 most loved lingerie colors and of the three, black is at the top of that list. It screams sexy. It is sassy, sensual and oh so sophisticated.

There are those who believe that black is a color of mourning, nevertheless I beg to differ. A woman wears black for several reasons; it boosts confidence and it’s dominating. Black lingerie is universal. Black lingerie is the largest volume seller of underthings and is sold in a conglomeration of varieties including; the babydoll, cami set, chemise, corset, garter set, sexy matching set, or teddy.

There are those who condemn black lingerie stating that you don’t buy it unless you want someone to see it. Again, I disagree. Some argue that women wearing black are predators luring men in. These were women that were controlling and who felt empowered or so it was said. Were these women on the prowl or were they women who just felt good slipping into their underthings knowing that their curves were delicately hugged?

In the 1940s black and white created a desirable impact against fair or pale skin. They were colors that every woman wore, yet they seemed to be frowned upon. According to Dior, black was the new chic and elegant in the 1950s. Black undergarments began to make a comeback as they were worn by Audrey, Bette and Joan. Black represented a new demeanor and along with the sexy black undergarments came the little black dress. Sexy is simply delicious and women want simple. They wanted it then and they still want it today. The modern day gal does not have hours to get dolled up to go out. She steps out of the shower and slips into comfort. Her ‘cup of tea’ is her black lingerie. She embraces it because it makes her feel superb and it looks fabulous on her. Flash forward to 2014, black is still a symbol of sex appeal.

Every woman should have black lingerie in her wardrobe. Her lingerie drawers should consist of alluring, enchanting and intoxicating black lingerie amongst their other favorite colors. When a woman wants to kick it up a notch, we recommend that she slips into her favorite black piece. At Simply Delicious Lingerie we are making changes to our lineup and later this fall our sexy online boutique will consist of undergarments that a woman who is a size small or a 4X can step into. Beauty is not a size. Beauty is confidence both inside and out. Wear it with charm, class and style. Embrace it as it wraps you up in a sense of sensuality. At Simply Delicious Lingerie we are your everyday SEXY!