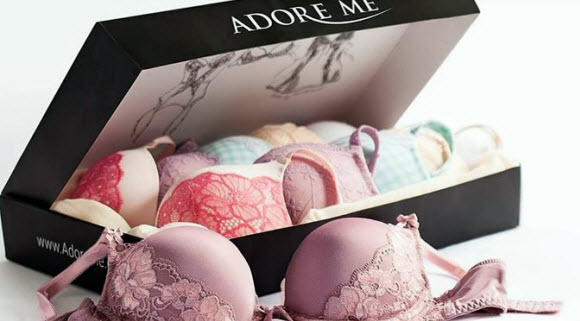 Fast-growing subscription lingerie startup Adore Me has a new partner to give its merchandise a brick-and-mortar presence, and this time around it is New York City-based Lord & Taylor.

Starting today, the company will be featured in the lingerie section of the department store’s Manhattan flagship in midtown, and also online at LordandTaylor.com, said Camille Kress, Adore Me’s business and brand development executive, in an exclusive interview.

“We’re digital first, and as an online-only brand, our lingerie was only visible online,” Kress said. “We wanted to see how the non-Adore Me customer reacted to the brand. It’s part of the same growth strategy we’ve had with our showroom store [at Adore Me headquarters] and with our partnership with Nordstrom.”

The company’s growth strategy has been working so far in terms of sales. Crain’s New York recently named Adore Me as No. 9 on its list of the top 50 fastest-growing companies in New York City, with its revenue increasing from $1.1 million in 2012 to $42.7 million last year, although the company is still working to hit profitability, as that listing notes.

Launched by founder and CEO Morgan Hermand-Waiche, the brand hired a former Victoria’s Secret designer to help take on that brand, the biggest player in U.S. lingerie, and it deployed tech tactics to build up the business, using A/B testing to figure out which SKUs would sell. The e-commerce company has also run television ads on channels such as MTV, Bravo, E! and Lifetime.

Now, it has been building up its presence beyond e-commerce through partnership deals with department stores. It has already been placed in five Nordstrom (NYSE:JWN) stores, but this time, the Lord & Taylor retail test lab will be in the Manhattan-based company’s own backyard.

“Their store is a few blocks away from our office, so we’re excited about having them so close to our office,” Kress said.

The merchandise featured in store and online will be priced similar to what Adore Me customers would pay if they are not buying lingerie via the subscription model, which provides a discount. Bras are priced at $39 or $49 depending on style, while panties are $10 a pop.

The company, which is known for offering a wide range of sizes particularly on the plus-size end of the spectrum, will showcase a good range of those sizes at Lord & Taylor, where bra sizes will range from 30A to 38 DD, “ bigger than most of our competitors size range,” Kress said.

Last month, the company launched an active wear line as a new vertical,allowing its members to choose between monthly lingerie offerings, swimwear, loungewear, and now active wear. Each month, members choose to buy or not buy, paying a discounted monthly fee for being members.