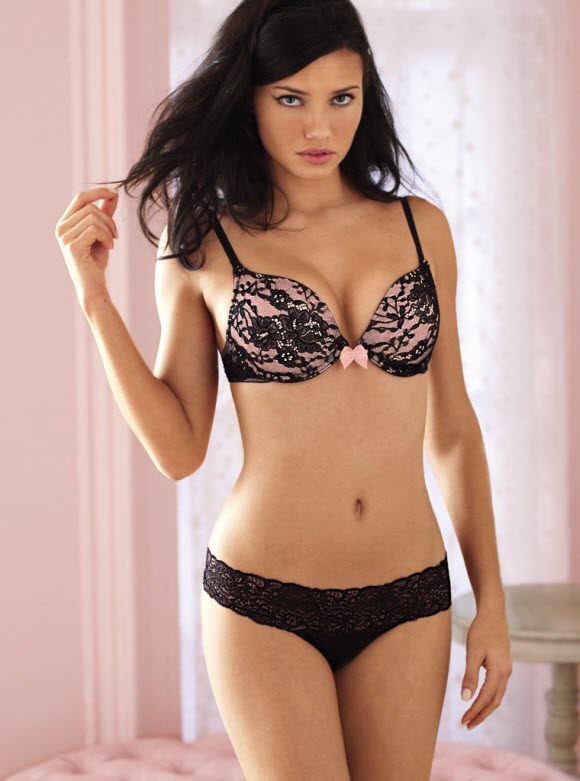 At the age of 15, Lima finished first in Ford’s “Supermodel of Brazil” competition, and took second place the following year in the Ford “Supermodel of the World” competition before signing with Elite Model Management in New York City. In 2012, she came in 4th on the Forbes top-earning models list, estimated to have earned $7.3 million in one year. She is married to Serbian basketball player Marko Jarić, with whom she has two daughters.

Lima never thought about being a model, although she had won many beauty pageants in elementary school. However, she had a friend at school who wanted to enter a modeling contest and did not want to enter alone, so Lima entered with her. Both sent in pictures, and the contest sponsor soon asked Lima to come out for the competition. Soon after, at the age of 15, she entered and finished in first place in Ford’s “Supermodel of Brazil” model search. She subsequently entered the 1996 Ford “Supermodel of the World” contest and finished in second place. Three years later, Lima moved to New York City and signed with Elite Model Management. After acquiring representation, Lima’s modeling portfolio quickly began to expand, and she appeared in numerous international editions of Vogue and Marie Claire. As a runway model, she has walked the catwalks for designers such as Vera Wang, Giorgio Armani and Valentino, among others. Lima became a GUESS? girl in 2000, appearing in that year’s fall ad campaign. She also appeared in the book A Second Decade of Guess? Images.

Lima continued to build upon her portfolio, doing more print work for Maybelline, for whom she worked as a spokesmodel from 2003 until 2009, the same year she appeared in the company’s first calendar.She did an ad campaign for Swatch Lima has also worked for notable fashion brands bebe, Armani, Versace, BCBG and Louis Vuitton. She also appeared on the covers and in the editorials of other fashion magazines such as Harper’s Bazaar, ELLE, GQ, Arena, Vogue, V, Esquire and French Revue des Modes. Her April 2006 GQ cover was the highest-selling issue that magazine for the year.It is also one of the biggest selling issues of the publication ever. The magazine named her “The World’s Most Voluptuous Virgin” !n 2008, she again fronted the cover of GQ, this time, attracting a record number of visits to the publication’s website.She also appeared in the 2005 Pirelli Calendar and became the face of Italy’s cell phone carrier, Telecom Italia Mobile, a move that earned her the nickname, “the Catherine Zeta-Jones of Italy.”

In February 2008, Lima was featured on the cover of Esquire, re-creating the classic 1966 Angie Dickinson cover on Esquire’s 75th anniversary. She appeared only in shoes, diamonds and gloves for the November 2007 issue of Vanity Fair celebrating 20 years of supermodels with her fellow Angels. In February 2008, she was chosen to be the face of Mexico’s Liverpool department store chain and launched the partnership with a press conference, runway show, and summer campaign. Lima returned to the high fashion runway in 2009, walking for Givenchy. That same year, after visiting Turkey, Lima signed a contract with Doritos to appear in print campaigns and commercials which began airing in Turkey that April. She was also one of the faces of Givenchy for the Fall/Winter 2009 season. Lima is one of the two faces of Blumarine’s Fall/Winter 2011 season.

In 2011, Lima signed a deal as a spokeswoman for Megacity by Votsu, a Brazilian social gaming company, to appear in their commercials. She also became the face of Brazilian luxury brand, Forum for their F/W and S/S seasons. Lima has worked with the most established photographers in fashion such as Inez van Lamsweerde and Vinoodh Matidin, Vincent Peters, Mario Sorrenti, Mert Alas and Marcus Piggott David Sims and Mario Testino. She became the face of Donna Karan’s spring 2012 advertising campaign, which was accused of having racist undertones due to a photo featuring Lima posing in front of huddled local Haitians.

In early 2012, Turkish clothing company Mavi Jeans, has made a contract with Adriana to be the face and spokesmodel for the brand. In the first quarter of 2012, her advertisement campaign increased sales to 50%, the highest increase in products sales. It also provided 20% increase in stores and online traffic. Furthermore, her television commercial which was watched by 28 million people became a trending topic at Twitter and the number of people now on Mavi’s facebook page have increased by 20%. Store officials at Mavi say the clothing Adriana wore in the ad campaigns were met with so much demand that, they ran out of stocks. Due to her success rate with the company, the European and Russian branch of Mavi decided to make her the global face of the brand.

Lima was photographed by artist Richard Phillips on the famed Copacabana sidewalk in Brazil for Visionaire no. 62 which was released in mid-2012. Lima is the subject of a painting by Phillips at Gagosian Gallery’s 24th Street Gallery in New York.

In an interview, Phillips talks about Lima: “She’s so powerful,really an entity, in a way”. Then added: “You meet her and there’s a generosity of spirit and very friendly and easy manner, and then all of sudden, the lights go on, and you realize you’re working with this absolutely extraordinary person who’s capable of creating these powerful images.”

Lima is probably best known for her work with Victoria’s Secret. Her first fashion show for the company came in 1999, and since being contracted as an Angel in 2000, she has appeared on subsequent shows ever since, opening the show in 2003, 2007, 2008, and 2010. In 2012, she opened the show for the 5th time less than two months after giving birth to her second child. In 2004, she was part of the five Angels promoting Victoria’s Secret nationwide in the so-called “Angels Across America”-Tour alongside Tyra Banks, Heidi Klum, Gisele Bündchen and Alessandra Ambrosio. She missed the 2009 show due to her pregnancy.Lima has appeared on several television ads for the brand, including the praised and criticized”Angel in Venice” commercial of 2003 with Bob Dylan. 2008 continued for Lima with hosting the What Is Sexy? program for the E! Entertainment Network and a July tour for the BioFit Uplift Bra launch. She was also featured in November’s Miracle Bra relaunch. Topping the year off, Lima wore the “Fantasy Bra” for the 2008 Victoria’s Secret Fashion Show. The bra, created by American jewelry designer Martin Katz, was set with 3,575 black diamonds, 117 certified 1 carat (200 mg) white round diamonds, 34 rubies, and two black diamond drops totaling 100 carats (20 g). Valued at over $5 million, the bra carried more than 1,500 carats (300 g). In 2010, she again wore the Fantasy Bra, called the Victoria’s Secret Bombshell Fantasy Bra. The bra which weighs in at 142 carats with 60 carats of white diamonds and 82 carats of topazes and sapphires is worth 2 million dollars.

Forbes named her Teleflora commercial as one of the best during Super Bowl XLVI, with the comment, “Teleflora … Adriana Lima. ‘Nuff said”. Among the many reviews the commercial had, The Huffington Post said: “One of the basic goals of any commercial is to capture the viewer’s attention, and by this measure, Teleflora.com’s ad featuring supermodel Adriana Lima was most definitely successful.” ESPN.com noted: “This actually makes sense when you think about it: Launch your Valentine’s Day campaign in the middle of the Super Bowl. That’s actually what flower company Teleflora is doing on Sunday. Even smarter? Hire supermodel Adriana Lima to star in it.”

Lima’s first acting role was the wife, alongside Mickey Rourke and Forest Whitaker, in The Follow (2001), a short film in BMW’s series The Hire, starring Clive Owen and directed by Wong Kar-wai.She also appeared with her fellow Angels in a guest spot playing herself in the series How I Met Your Mother in November 2007.

In 2008, Lima appeared on the American television series Ugly Betty, where she played herself and made friends with the series’ title character, Betty.

Lima was listed in the 2005 Forbes’ edition of The World’s Best-Paid Celebrities Under 25. She ranked ninety-nine in the 2005 and 2006 Forbes’ edition of The Celebrity 100 lists.In 2012, she was listed in Forbes Celebrity 100 power list for earning more than 7 million between May 2011 and May 2012. In 2012, she ranked number eight in forbes’ “The World’s Most Powerful Latino Celebrities” list for earning more than 7 million dollars.

Lima was chosen to be a part of People magazine’s 100 most beautiful people in the world list, sharing that space with the Angels, with whom she also received a star on the Hollywood “Walk of Fame” prior to the 2007 Victoria’s Secret Fashion Show.That same year, she ranked 7th on FHMs “100 Sexiest Women 2007” list.

In 2010, Lima was ranked No. 46 on the 50 most popular women on the Web according to Google search results. A results from a market research study in 2011 about the UEFA Champions League released by Heineken showed that 52% of men would rather watch their team lift the Champions League trophy than go on a date with Lima. McAfee ranked Lima as the 6th most “dangerous” celebrity in cyberspace in 2010. The ranking, relating to the use of the names of popular celebrities to lure people to websites that are laden with malicious software, ranked Lima number eight in 2011. Complex (magazine) ranks her 4th in the list of “The 100 Hottest Supermodels of All Time”.

In a 2011 interview with the Daily Telegraph, prior to the Victoria’s Secret Fashion Show, Lima revealed her diet regimen – nine days before the show, she drinks only protein shakes: “No liquids at all so you dry out, sometimes you can lose up to eight pounds just from that,” she says. She also stated that the last three weeks before the show, she works out twice a day. The interview got negative reviews on the media and was mentioned in CNN’s Anderson Cooper’s “Ridiculist” Shortly afterwards, Lima defended herself in an interview with E!, “I know it’s very intense but … I just have an athlete’s mind and I appreciate doing this thing,” she said. “It’s not that I do crazy diets throughout the year. I just do it for this particular thing. After this show, I become normal again.”

The Adriana Lima diet became so popular that, it eventually became one of the top five most searched diets on the web in 2012 according to Google. Other celebrities on the list are Beyonce and Michael Phelps.

She is a devout Roman Catholic who attends mass every Sunday. In April 2006, she told GQ that she was a virgin. “Sex is for after marriage,” she explained. “They [men] have to respect that this is my choice. If there’s no respect, that means they don’t want me.”

Lima does charitable work helping with an orphanage, “Caminhos da Luz” (Ways of Light), located in Salvador. She helps with construction to expand the orphanage, and buys clothes for poor children in Salvador, Bahia. She appeared on Var mısın? Yok musun?, the Turkish version of Deal or No Deal, where her prize money went to a hospital in Istanbul for children fighting leukemia.