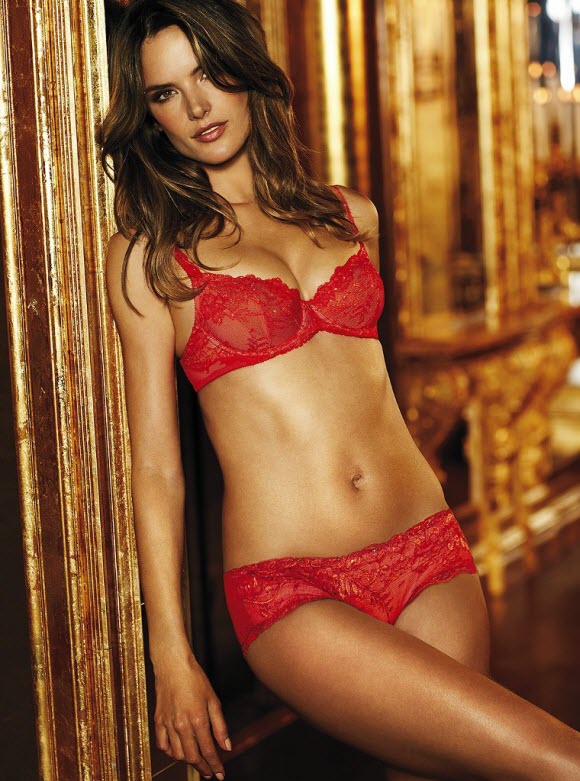 Alessandra Corine Ambrósio ( born April 11, 1981) is a Brazilian model. Ambrosio is best known for her work with Victoria’s Secret and was chosen as the first spokesmodel for the company’s “PINK” line.

Ambrosio is currently one of the Victoria’s Secret Angels and has modeled for brands such as Next, Armani Exchange, Christian Dior, and Ralph Lauren.
Ambrosio serves as an ambassador for the National Multiple Sclerosis Society.Ambrosio was also selected by AskMen.com as Number 2 out of the “Top 99 Most Desirable Women of 2008”. In 2012, she came in 6th on the Forbes top-earning models list, estimated to have earned $6.6 million in one year

Ambrosio was born in Erechim, Brazil on April 11, 1981. Her parents, who are of Italian and Polish Brazilian descent, own a petrol station. She enrolled at a modelling class at the age of 12, and at the age of 14, she was one of 20 finalists for the 1996 Elite Model Look national competition for Brazil. Ambrosio was always insecure about her large ears, and at the age of 11, she had cosmetic surgery to have her ears pinned back, though two years later she suffered complications.In 2006, she appeared on The Tyra Banks Show, and said that the surgery was a bad experience and has discouraged her from ever getting plastic surgery again.

When Ambrosio was 12 years old, she enrolled in modeling classes, and then began modeling for Dilson Stein at age 15. Competing in Brazil’s Elite Model Look competition started her modeling career in earnest. Her first notable modeling job was the cover of Brazilian Elle magazine. Elite passed along some of her Polaroids to Guess which led her booking the Millennium GUESS? campaign.She has since appeared in advertisements for brands like Revlon, Christian Dior, Giorgio Armani, and Ralph Lauren, as well as the Pirelli Calendar. She has walked the catwalks for designers such as Prada, Chanel, and Oscar de la Renta. She has appeared in numerous international magazine covers, including Cosmopolitan, Elle, GQ, Harper’s Bazaar, Marie Claire, Ocean Drive, Vogue and the only model to appear on the cover of Glamour in the United States in 2006.

In 2004, Ambrosio launched her line of swimwear called Alessandra Ambrosio by Sais, a division of Rosa Chá. It sold 10,000 units in only its first month on the market. Ambrosio was the face for the UK company Next and starred in their first television campaign in 12 years. On the July 2009 cover of Marie Claire, Ambrosio appeared in a spread with Sacha Baron Cohen to promote Baron Cohen’s 2009 film Brüno.

Ambrosio, became the face of Brazilian sportswear brand Colcci costarring with Ashton Kutcher in a steamy denim ad. She was ranked No. 5 on Forbes’ The World’s Top-Earning Models list, with an estimated earnings of $5 million over the year 2010–2011. In October 2011, Ambrosio became Vogue’s blogger, commenting on her wardrobe by posting one photo of herself each day for a month. On August 13, 2012 she appeared in the London 2012 Olympic Closing Ceremony as part of Rio de Janeiro’s Handover show

By 2004, she was selected as the first spokesmodel for the Victoria’s Secret “PINK” line In 2005, she walked the Victoria’s Secret Fashion Show runway wearing lingerie made entirely out of candy. In the 2008 edition of the Fashion Show, she walked the runway three months after giving birth to her first child , and opened the show the following year in 2009. The 2011 show saw her wearing the heaviest wings (30 lb) ever made for the show. In 2012, Ambrosio was chosen to wear the “Fantasy Bra”. The Floral Fantasy Bra, created by London Jewelers, features amethysts, rubies, sapphires and diamonds (including a 20-carat white diamond in the center), all set in rose and yellow gold, according to InStyle. There’s also a matching belt adorned with more than 5,200 precious stones.

Ambrosio has made several television appearances, notably a cameo as herself on HBO’s Entourage; The Late Late Show with Craig Kilborn; Late Night with Conan O’Brien; A guest judge on Project Runway season 2: Team Lingerie and twice on The Tyra Banks Show.

In 2006, she had a cameo on the box-office hit movie, Casino Royale appearing briefly as Tennis Girl #1. Ambrosio guest-starred on How I Met Your Mother (episode: “The Yips”) on November 26, 2007 with her fellow Victoria’s Secret Angels Adriana Lima, Selita Ebanks, Marisa Miller, Miranda Kerr, and Heidi Klum.

She is often cited by the popular media as one of the world’s sexiest women. As an Angel, she was chosen as one of People magazine’s annual “100 Most Beautiful People in the World” in May 2007.