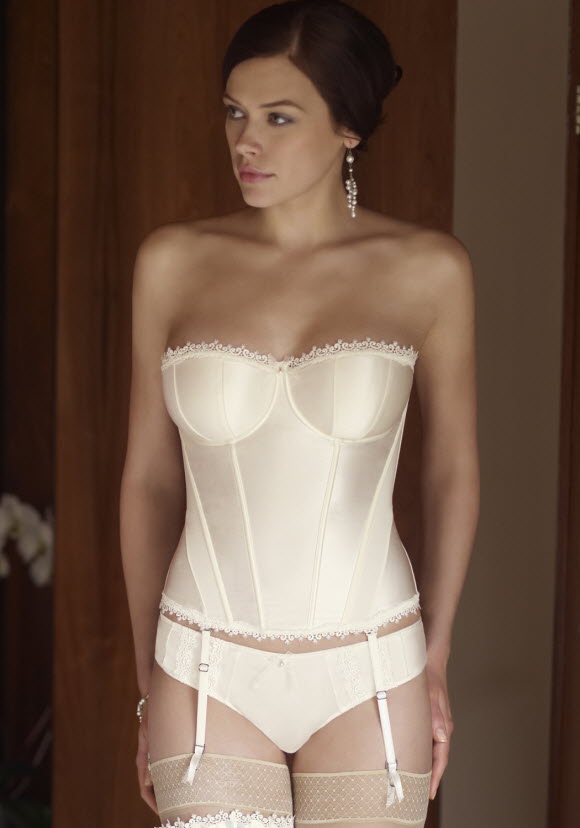 A basque is an item of women’s clothing. The term, of French origin, refers to a type of bodice or jacket, and in modern usage a long corset, characterized by a close, contoured fit and extending past the waistline over the hips.

It is so called because the fashion was adopted from Basque traditional dress, initially by the French and then throughout Western fashion.

In Victorian fashion, basque refers to a closely fitted bodice or jacket extending past the waistline over the hips; depending on era, it may be worn over a hoopskirt (earlier Victorian era) or bustle (later Victorian era). A basque bodice (i.e., when considered as a dress component, to be worn with a specific skirt) could also be referred to as a “corset waist”, because of its close fit.

In modern usage, basque may also refer to clothing details reminiscent of lingerie such as frilly lace and cutout, “peekaboo” designs.

In 20th century and contemporary attire, the term is used to refer to certain articles of lingerie, particularly a type of corset known as a torsolette, or alternately a torso-hugging camisole that resembles a corset (typically featuring decorative front or back lace-up detail), but of more delicate construction and offering little or no figure-molding compression.

The undergarment is similar to a Victorian-era corset, but with less compression of the ribs. The modern-day torsolette features lace-up or hook-and-eye fastening, as well as boning or vertical seams for structure and support. It usually, though not always, has brassiere cups, and is distinguished from the bustier by its length. It sometimes features detachable garters, or suspenders. In American English, it is sometimes known as a “merry widow” (or “merrywidow”).