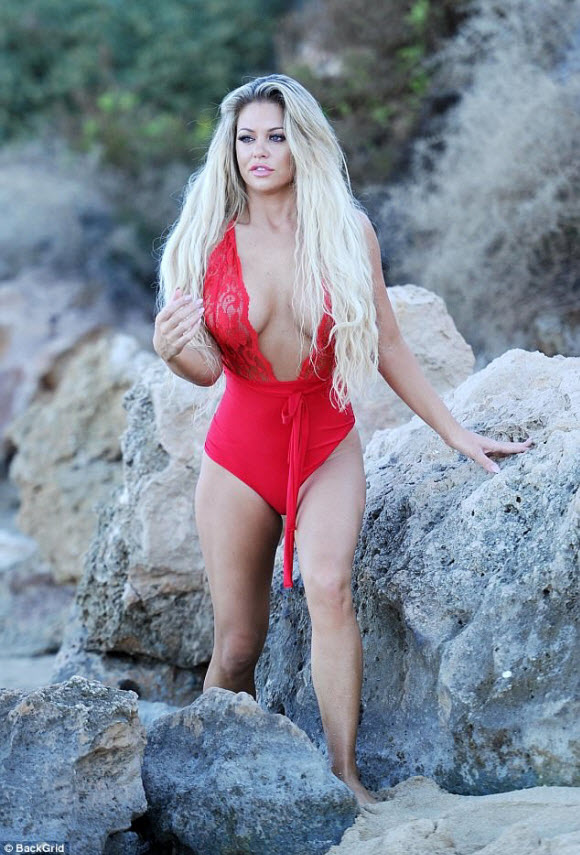 Busty Bianca Gascoigne, 31, put on a sizzling display as she posed up a storm during a recent sun-drenched break to Cyprus.

She is never one to shy away from flaunting her enviable frame.

And slipping into a VERY plunging scarlet red swimsuit, Bianca Gascoigne put on a sizzling display as she posed up a storm during a recent sun-drenched break to Cyprus.

Seeming to take part in a beach shoot, the former Celebrity Big Brother star, 31, left little to the imagination in her lace all-in-one, as she pulled a slew of sultry poses on the sand. 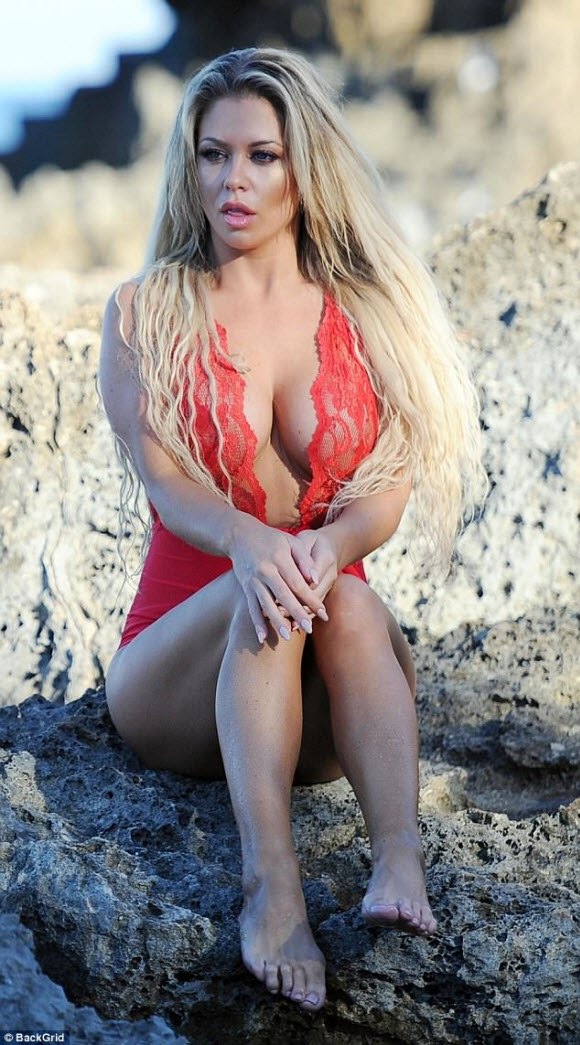 The starlet’s eye-catching swimsuit sheathed her svelte physique and boasted an extremely low-cut lace neckline that framed her bust.

Her tiny waist was highlighted by tie-up detailing around the middle and its high-rise cut made sure to leave her lengthy legs firmly on view, along with her pert behind.

Flaunting a bronzed glow, Bianca wore her long blonde tresses down to fall past her shoulders in beachy tousled waves, parting her locks in the middle to frame her face. 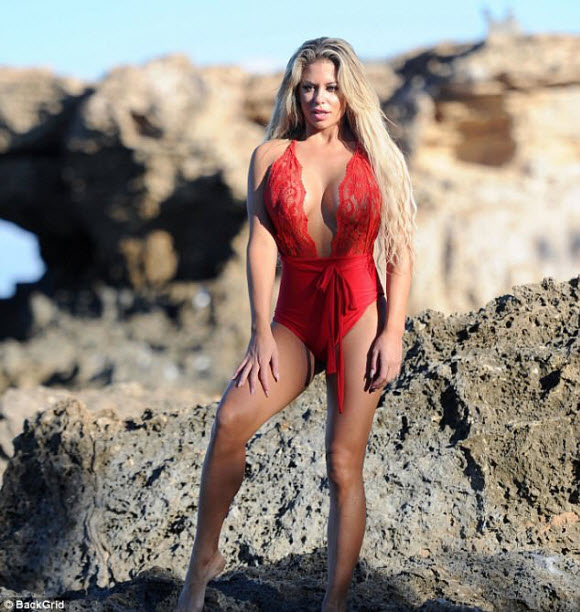 She accentuated her natural beauty with a subtle yet glamorous make-up look that came complete with bronzer-swept cheeks and a slick of natural pink lipstick across her lips.

The beauty was seen posing provocatively as she sat on rocks along the beach, before strolling through the sand with a smouldering look on her face. At one point, Bianca was seen throwing her mane forwards as she attempted to add a touch more volume to her perfectly coiffed locks.

Her appearance in Cyprus comes after Bianca revealed she has split once again from her ex-boyfriend and cage fighter, CJ Meeks.

She confirmed their break up last month and was no doubt keen to show him exactly what she’s missing as she stripped down for the sizzling shoot overseas.

Speaking of their failed romance, Bianca had told The Sun: ‘Me and CJ broke up. Yeah, it’s not great. We split up, so yeah, it’s over.’ 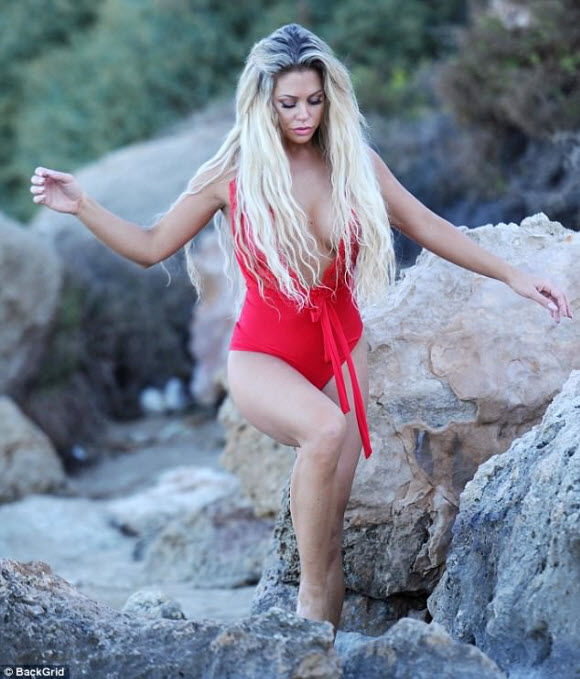 Suggesting that her working commitments had got in the way of their romance progressing, Bianca said: ‘I’ve got so much going on at the moment it’s a bit overwhelming right now… it’ll be alright, but it’s too much right now.’

She had dated CJ prior to her Celebrity Big Brother appearance in January, earlier this year.

The reality beauty had starred on the Channel 5 reality series and had shocked fans by striking up a romance with footballer Jamie O’Hara, as CJ accused Bianca of being unfaithful. 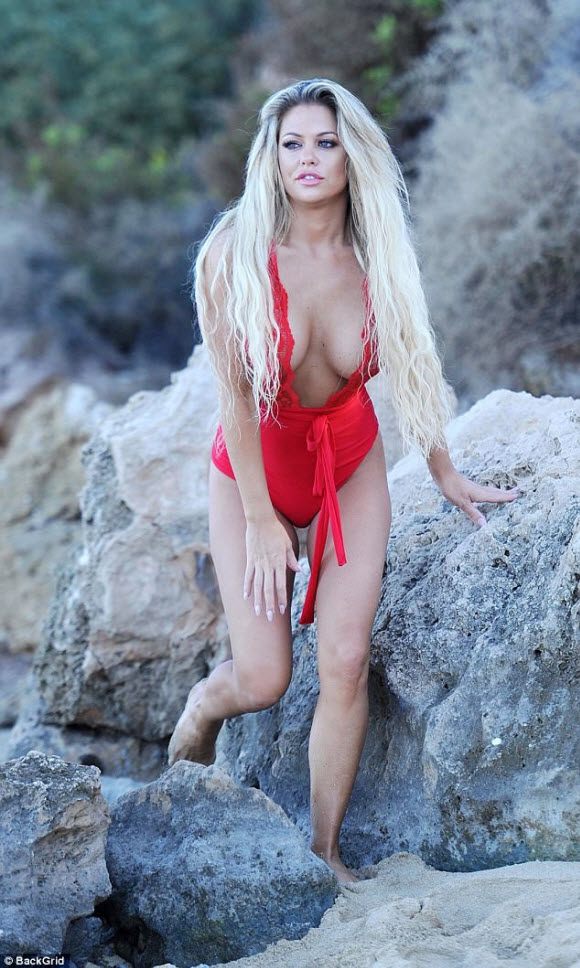 She hit back by claiming she was single in the house, telling New magazine in an interview following her exit from the show: ‘Obviously things weren’t right between us. We were on and off anyway.

‘I got cast [for CBB] when I was single. It was an on/off relationship. I didn’t feel it needed to be addressed.’

She had been hopeful of continuing her romance with Jamie on the outside, but things didn’t work out and the star had reunited with his on/off girlfriend Elizabeth Tierney, who he is now engaged to after popping the question last month.

Jamie was previously married to former WAG Danielle Lloyd, whom he shares three sons with; Archie, Harry and George.

Bianca and CJ, meanwhile, confirmed their reunion in July after managing to work through their differences.