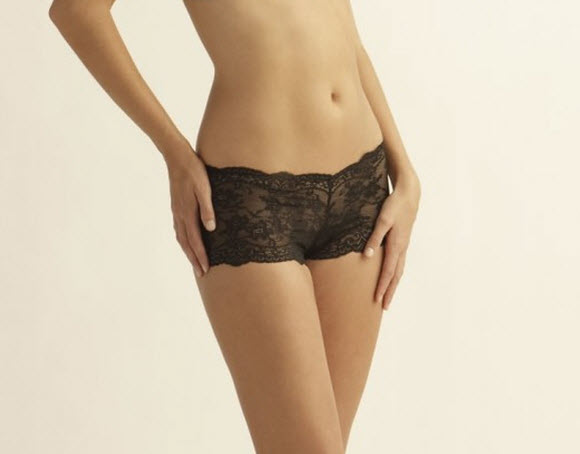 Boy shorts, also known as boy short panties, boys’ cut, booty shorts, shorties, tap panties or boyleg briefs are a kind of women’s shorts that goes all the way down the hips, named for their similarity in looks to men’s knit boxer shorts, which themselves are a variation on traditional boxer shorts.

Some even resemble men’s briefs, complete with fly and contrast trim. Unlike men’s briefs, however, this style is usually lower cut, and is designed to fit and flatter a woman’s figure. Boy shorts often cover most of the buttocks area.

Boy shorts have become a popular choice, since they avoid displaying a prominent visible panty line, and are a modest and comfortable alternative to thongs and conventional panties. They are also popularly matched with a camisole top and worn as loungewear. Cotton-spandex blends and lace are the most popular materials for boy shorts.

The term boy shorts can also refer to bathing suit bottoms in the same style.