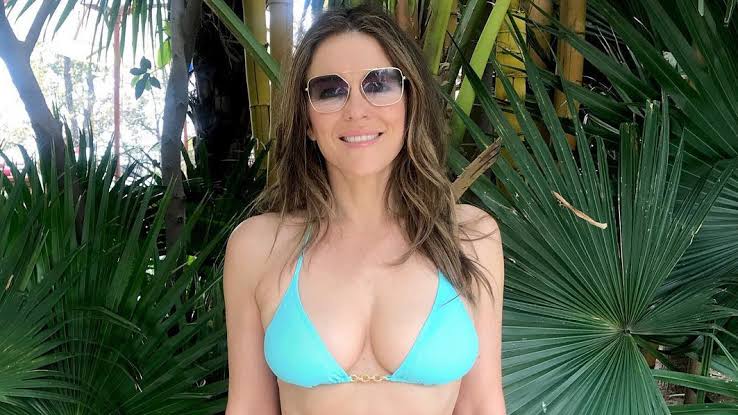 Elizabeth Hurley posed in a sizzling promotional photo for her swimsuit brand. However, half of the Bedazzled star’s tiny bright bikini was nowhere to be seen.

On Saturday, the official Instagram page for the actress’ beachwear brand uploaded a snapshot of Elizabeth modeling one of her bathing suits. The fit 54-year-old was pictured rocking a pair of hip-hugger string bikini bottoms. They were a cheery sunshine-yellow color, and they featured extra long ties on the sides. These embellishments drew the eye to Elizabeth’s shapely hips and thighs.

The positioning of the vibrant, low-slung bottoms helped highlight Elizabeth’s long, lean torso. Because the garment exposed so much of her flawless skin, its small size also helped to showcase just how flat and sculpted her envy-inducing stomach was.

Elizabeth had doffed her top for her photoshoot. However, she avoided revealing too much to the camera by posing with her arms crossed over her chest. She positioned her right forearm underneath her bust, and she grabbed her right upper arm with her left hand. Even though her limbs were keeping much of her bust area covered up, the Austin Powers actress still managed to flash more than a hint of cleavage. 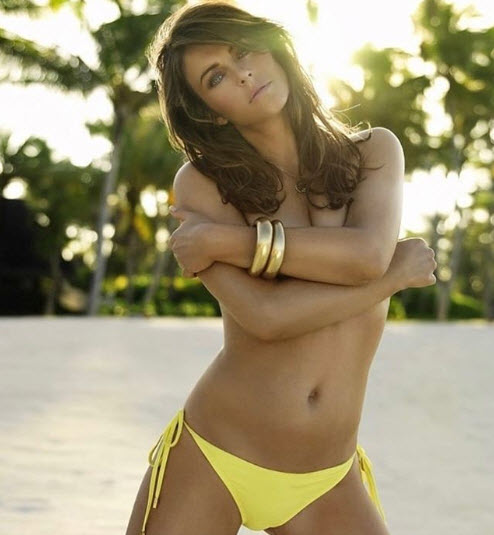 Elizabeth added a little extra visual interest to the top half of her photo by wearing two massive gold bangles on her left wrist. Her long, layered hair was parted to the side, and it was styled in beachy waves. A few locks of her honey-tinged brunette tresses partially covered up her left eye.

Elizabeth’s makeup included peachy blush, a pale pink lip, and brown shadow that made her light blue eyes pop. She was giving the camera an intense, penetrating gaze as she tilted her head to the side.

The purpose of Elizabeth’s photo wasn’t to help sell just the bottom half of the two-piece she was pictured wearing. Rather, the image was being used to promote a 30 percent off holiday sale on her beachwear brand’s website. However, few of the Instagram account’s followers were discussing the sale.

“If someone wants to find the definition of beauty this photo expresses and defines it,” read one response to the post.