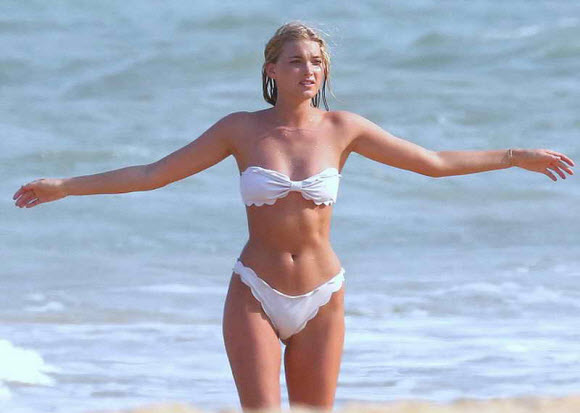 As a Victoria’s Secret model she’s used to posing in her lingerie.

But Elsa Hosk dared to bare even more as she posed topless for a sizzling Instagram snap on Wednesday.

Truly at one with nature, the 28-year-old Swedish stunner was a vision of beauty as she settled in atop of rock formation and stared out over the skyline.

Strategically placing her arms to protect her modesty, Elsa flashed an abundance of sideboob and her impeccably toned stomach as she sat cross legged on a blanket.

She chose to keep her white bikini briefs on for the snap, whilst she wore her golden locks in a topknot secured with a pair of oversized shades.

Elsa captioned the snap: ‘In me element’. 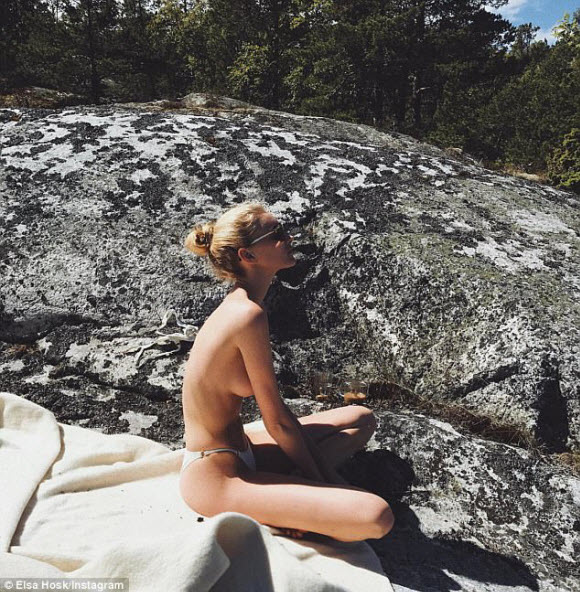 Elsa grew up in Sweden where she was a basketball player, previously saying that her athletic background has made her a better model.

‘Even holding a pose for a long time, making your body into strange shapes, and just knowing what it looks like – I think [for me] that comes from being a basketball player,’ she said.

She has walked in the Victoria’s Secret show since 2011, and was promoted to Angel status in 2015, joining an elite group of famed supermodels that include Alessandra Ambrosio, Behati Prinsloo and Stella Maxwell.

The 5ft 10in top model recently joined a bevy of lingerie-clad Victoria’s Secret beauties for Justin Bieber’s steamy 2U video.

The music video featured an array of fashion shoot-inspired scenes with Elsa stripped down to her bra as she readied for her photo shoot.