Facebook Rejects New BoPo Lingerie Campaign For Being Too Sexy 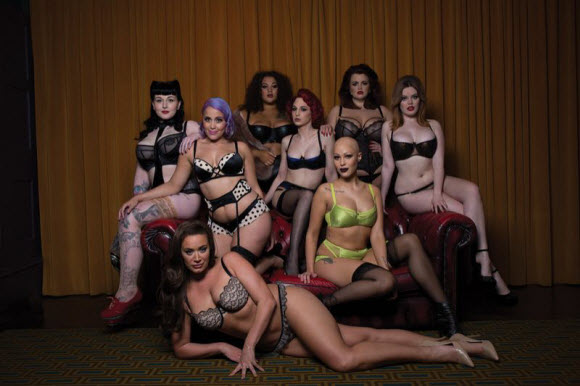 Just when you think we’re beginning to make grounds in breaking down one-body-fits-all beauty boundaries, a body-positive lingerie advert, featuring a transgender model, is rejected by Facebook.

The new ad, part of CurvyKate’s new Scantilly campaign aims to give a much needed hit of diversity in the lingerie industry by shunning professional models and instead enlisting eight powerful female role models including a transgender woman, an amputee, an alopecia sufferer, a plus size blogger and a recovered anorexic.

We reported on the campaign earlier this month and were inundated with comments from women praising the ad for the empowering message it’s spreading.

But, it seems Facebook don’t seem to agree and when a group shot from the campaign was added to the social media site, it was quickly removed for breaching its advertising policies.

Since then a further two shots from the campaign including one of transgender model, Effie, have also been removed.

Though Facebook hasn’t commented specifically about the reasons the ads were removed, the standard message it posted by way of an explanation said: “We don’t allow ads that promote sexual acts, sexual videos and publications, strip clubs or adult shows. Ads like these are sensitive in nature and typically evoke a negative reaction from viewers.”

But though the shots are undoubtedly sexy (as you’d expect for a campaign called #TheNewSexy), there’s certainly no nudity, and it seems the only difference between these particular ads and other lingerie campaigns is the models themselves.

Speaking exclusively to Yahoo about the ad removal, Hannah Isichei, CurvyKate’s Head of PR and Marketing, said she believes taking down the images sends the wrong message about diversity.

“At first I thought there must be some mistake when Facebook cancelled our ads,” she says. “Although Scantilly does offer more risqué pieces (and why not?) all images shown on our social pages would be classed as standard lingerie shots. No nipple, no bum shots – just gorgeous women in lingerie, being proud of who they are,” she continues.

“Across Facebook you can see lingerie images, swimwear images and other smaller cupped ‘sexy’ lingerie brands seem to be able to advertise – but the Scantilly images did not pass Facebook’s rules and regulations as they are thought to ‘provoke negative comments’ and advertise sexual activity. We were baffled, as were our fans. Everyone who is active on Facebook has seen pages that should be banned, such as those featuring violence, racism or sexism but yet eight women spreading a powerful message has been deemed as ‘negative’.”

Hannah believes the ad removals go against the positive strides we have been making towards a more diverse fashion industry.