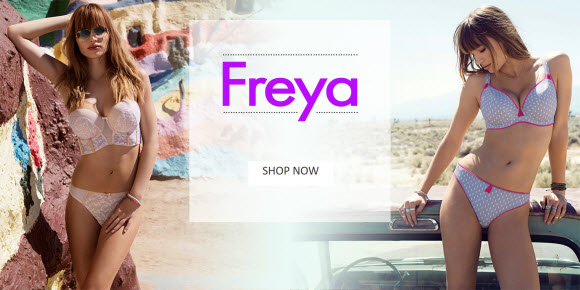 Wacoal-owned lingerie brand Freya is the latest advertiser to hedge its bets on original podcasts, with the group’s top marketer in Europe saying the medium is something the Japanese company – which also owns Fantasie, Goddess and Elomi – might now invest in across its portfolio.

The brand’s podcast, When Life Gives You Melons, is hosted by TV presenter and radio host Maya Jama and aimed at busy young women. The eight-part series was created by PR agency The Romans and is poised to run through to the festive period, featuring weekly chats with celebrity guests around issues affecting young women, which includes everything from “from career advice to boobs”.

Laura Simon, Wacoal’s chief marketing officer for Europe, said the decision to produce original content with the power to weave its way into women’s everyday lives was a no brainer given that Freya’s target demographic of 25 to 34-year-olds counts for around 40% of the UK’s podcast audience.

“The conversations women are having with friends around dating, relationships and work are very powerful. So, it’s about finding our place in that culture and doing something that connects with our audience in a way that is different within the [lingerie] category,” she told The Drum.

From Wonderbra’s famous 90s ‘Hello Boys’ billboards to Curvy Kate’s body positive-centric campaigns, lingerie marketing has witnessed a significant shift in recent years, and for Simon this progression is something the Wacoal, which turned around ¥203bn (£1.37bn) in net sales last year, is throwing its weight behind.

“It’s really important that we move away from the historical male gaze stuff and go into being in the narrative of people’s lives and create something relevant. That’s what the podcast does,” continued Simon.

What’s more, she said, podcasts are personal; listeners have to make a conscious choice to download or subscribe, making them an attractive buy for advertisers seeking an alternative to potentially off-putting online ads which interrupt user experiences.

“We have a loyal consumer, but we want to think about attracting younger fans and establishing a clear tone of voice for the brand with a podcast that reflects our consumers,” she added, saying she believed podcasts give brands a chance to be culturally relevant and resonate with potential shoppers in a fresh way.

Freya’s timely choice to double down on podcasts comes amid similar moves from brands like Jaguar Land Rover which has been experimenting with immersive story-driven podcasts and eBay which is on the second series of its Open for Business how-to style show.

In the UK, Rajar figures from last winter claim that podcasts reach 4.7 million UK adults, but the US is arguably ahead of the curve. Earlier this year, the Interactive Advertising Bureau (IAB) unveiled its first “podcast playbook” for brands looking to capture US listeners’ ears while research conducted by PwC estimates podcast ad revenues in the States are set to top $200m (£151m) this year alone, an 85% leap on the previous year.

Freya’s content sits alongside the likes of S-Town and BBC Women’s Hour, only recognisable as a branded podcast by the publisher name. Simon said the aim is to keep the conversation as natural as possible with the only mentions of Freya bookmarking the podcast at the start, middle and end – as any other sponsor would typically do.

The wider Wacoal group has undergone something of a marketing remodel since Simon joined in 2016, and while it’s too early to measure results of the Freya podcast trials, anecdotal feedback has so far has been positive, she said.

The first episode peaked in the top 20 in the UK podcast charts, with Simon saying that across the wider group is now mulling further investment in the medium.