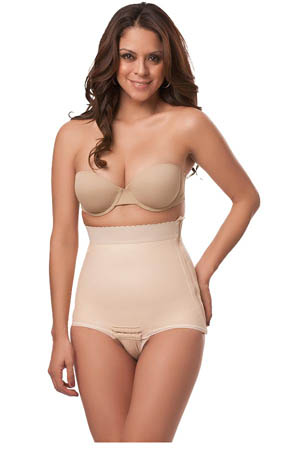 A girdle is a garment that encircles the lower torso, perhaps extending below the hips, and worn often for support.

The word girdle originally meant a belt. In modern English, the term girdle is most commonly used for a form of women’s foundation wear that replaced the corset in popularity. In sports, a girdle may be similar to compression shorts.

Historically and in anthropology, the girdle can be a scanty belt-shaped textile for men and/or women, worn on its own, not holding a larger garment in place, and less revealing than the loin-cloth, as was used by Minoan pugilists.

Traditionally, the women of the Wemale ethnic group of Seram Island, Indonesia wore rattan girdles around their waist.

Constructed of elasticized fabric and sometimes fastened with hook and eye closures, the modern girdle is designed to enhance a woman’s figure. Most open-bottom girdles extend from the waist to the upper thighs. In the 1960s, these models fell from favor and were to a great extent replaced by the panty girdle. The panty girdle resembles a tight pair of athletic shorts. Both models of girdles usually include suspender clips to hold up stockings.

Girdles were considered essential garments by many women from about 1920 to the late 1960s. They created a rigid, controlled figure that was seen as eminently respectable and modest. They were also crucial to the couturier Christian Dior’s 1947 New Look, which featured a voluminous skirt and a narrow, nipped-in waistline, also known as a wasp waist.

Later in the 1960s, the girdle was generally supplanted by pantyhose. Pantyhose replaced girdles for many women who had used the girdle essentially as a means of holding up sheer nylon stockings. Those who want more control purchase “control top” pantyhose.

Girdles and “body shapers” are still sold to women who want to shape their figure with a garment. Some of these garments incorporate a brassiere and thus become functionally equivalent to a corset. However, they do not incorporate boning and hence do not produce the constricted waistline characteristic of Victorian-era corsets. A modern example of the girdle is sold under the brand name Spanx.

In literature, girdles are often portrayed as magical, giving power and strength if worn by men, and protection if worn by women. Several scriptures in the Bible make use of the girdle as a symbol for readiness and preparation. Ishtar, a Babylonian Goddess, wore a fertility girdle, which, when it was removed, rendered the Universe barren. Hercules wrestled with the Amazon queen for her girdle in his Greek myth. Aphrodite, or Venus in Roman mythology, also wore girdles associated with lechery in later poetry.

For men a girdle was often used to hold weapons. It also gave them freedom to move in a fight, unlike other types of clothing. Both of these are thought to carry the connection of power to the man’s girdle in literature. For example, Odysseus wears a girdle which allows him to swim for three days straight, and a girdle worn by Thor doubles his strength.

Later on, for women, the girdle became a sign of virginity, and was often considered to have magical properties. Monsters and all types of evil are recorded as being subdued by girdles in literature, a famous one being the dragon slain by Saint George. Marriage ceremonies continued this tradition of girdles symbolizing virginity by having the husband take the wife’s girdle, and prostitutes were forbidden to wear them by law in historic France. Often in literature, women are portrayed as safe from sexual or other attack when wearing a girdle, but suddenly vulnerable if it is missing or stolen.

Non-clothing uses in literature include Tolkien’s “Girdle of Melian”, a magical, protective “wall” surrounding an elven kingdom, and the metaphorical “girdle of righteousness” mentioned in the Bible, representing righteousness as a protection as well as something to be worn constantly.

The twentieth century women’s girdle attracts various references in literature, often in a disparaging way. For example, Marilyn French in her classic book, The Women’s Room, is very critical not only of the girdle itself, but also of the virtual compulsion to wear one, a compulsion which existed until the late 1960s. In John Masters’s Bhowani Junction, once the mixed-race Victoria Jones decides to opt for an Indian rather than British persona, she rejects her girdle as a “western garment”.

Like its predecessor garment, the corset, the girdle attracts a degree of eroticism. Some people like to wear girdles and/or find people attractive in them. In addition, the Australian feminist writer, Beatrice Faust, in her book Women, Sex and Pornography refers to a “slight but sustained feeling of arousal” when wearing a “moderately tight” girdle.

In American football, a girdle is a piece of clothing that is worn under the football pants to keep the hip, thigh, and tailbone pads in place, making the process of putting on the tight football pants easier. Older girdles resembled chaps, in that they covered only the front of the leg with pads, that snapped on. Modern girdles are essentially a tight pair of compression shorts with pockets for the pads. The girdle was also used in the Mesoamerican ballgame and is used in hockey (National Hockey League).

As a liturgical vestment, the girdle, also known as a cincture, is a long, rope-like cord tied around the waist over the alb.

Beer (1999: p. 318) describes the bone girdle as the ‘netted bone apron and belt’ as vesture of the Dakinis and Heruka of the Cham Dance and Gar Dance of Tibetan Buddhism sacred ritual dance performances:

The bone ornaments worn in these ritual dances are exquisitely carved – especially the netted bone apron and belt, which are commonly adorned with intricately carved images of dakinis.