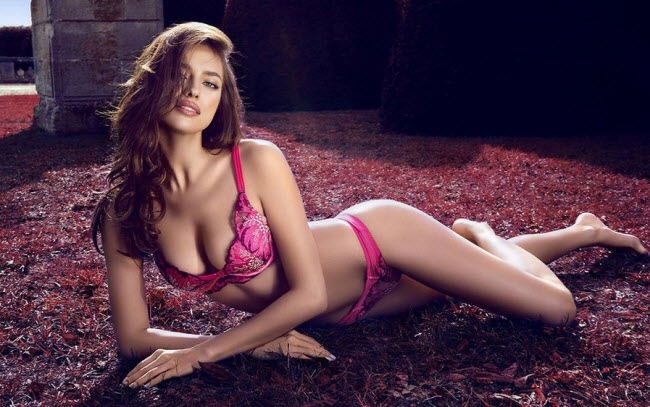 Irina Shayk strutted her stuff in a green lingerie set, and she stole the show at the latest Savage X Fenty show.

She treated her 20.1 million Instagram followers to a few shots from her appearance at the show.

Irina was nearly unrecognizable, thanks to her bleach-blonde eyebrows, which have become a trend over the years in the fashion industry.

Her glowing skin and enviable muscle tone gave her away, however.

Irina showed that mint green was her color as she led the way with a line of models following her, surrounded by purple light. Irina rocked a semi-sheer green bustier with a shimmery finish.

She paired the bustier with a skirt made of the same material and matching mint green underwear. She placed one hand on her hips and revealed a manicure in a gorgeous copper color.

Irina was expertly accessorized with a large snake around her neck with a green crystal on the snake’s head. Her dark brown tresses were braided in the front, with brown locks cascading down her back.

A swipe right showed Irina as she took things outdoors and posed by a tree trunk. She placed one hand on the tree and arched her back with a bright spotlight shining down on her. The picture also showed Irina’s gorgeous strappy stilettos with silver straps that wrapped around her legs.

Irina’s piercing eyes featured dark liner which made them pop even more.

Another shot showed Irina with half-open eyes as a manicure fixed her sparkly nails.

Irina promoted the Savage X Fenty show and she also encouraged her American followers to vote.

Irina has remained in demand in the modeling world, with no signs of slowing down.

Rihanna isn’t the only number-one musician with whom Irina has worked frequently. Irina has also worked with Ivy Park as the face of their swimsuit designs for many years.

The futuristic shots showed Irina in a neon yellow underwear and bra set with a matching robe. She posed in front of a silver background with futuristic shapes adding a super chic vibe.