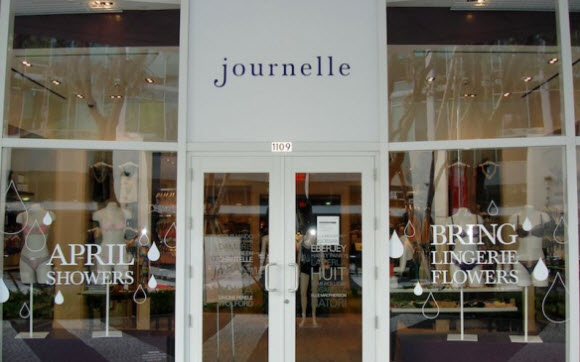 The company has five retails stores, including a new Los Angeles location which opened 3 weeks ago, and newly built flagship in the Union Square neighborhood of New York City. Additionally, the company runs a growing e-commerce site and is launching its fifth season of their private label line, Journelle Collection. The company’s mission statement underpins all their work: to help women feel beautiful and confident, starting from the inside out.

Journelle’s CEO, Lyn Lewis, describes the importance of the new west-coast expansion: “This is such an exciting time for our company. We’ve always wanted to be in Los Angeles, where we already have so many online customers. This new California store is an opportunity to connect with these women in person, as well as to meet many others who I’m sure will also love discovering lingerie with us. Journelle- and lingerie- is all about feeling great, beautiful, sexy, and confident, and it’s a pleasure and a privilege to now get to connect with amazing women in new parts of the country.”

Additionally, the brand’s New York Flagship in the heart of Union Square will be reopening on October 18th, after moving across the street. The new space has 7 fitting rooms, instead of the 4 in the prior location, and a larger retail floor space.

Journelle will also partake in numerous fall and winter partnerships with like-minded brands that cater to the lingerie company’s devout customer. The tenth anniversary will be celebrated through several in-store and online promotions, the launch of new Journelle Collection, and other seasonal collaborations, which will encompass experiential events for VIP customers. Through the fall season, major wine distributor Boisset will serve as Journelle’s exclusive spirits partner, with Haute Couture French Bubbles available at all in-store events. Boisset and Journelle will also be hosting a VIP giveaway contest beginning in October, for a luxurious trip for two to iconic Napa, California.