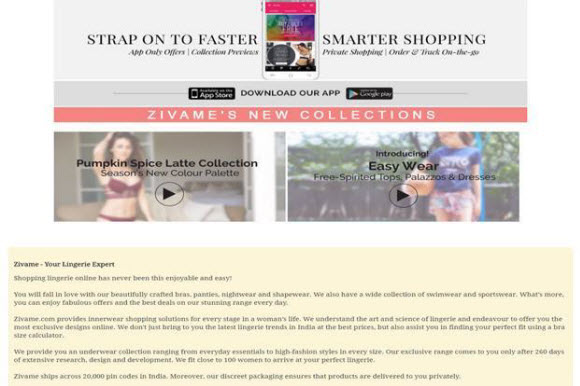 Online lingerie retailer Zivame (Actoserba Active Wholesale Pvt. Ltd) has discarded aggregation of brands in favour of becoming a private label business, a move that will help it earn higher margins and bolster its bottom line, said two people aware of the development.

Zivame started out as an aggregator of brands, including Enamor, Amante and Jockey, among others, but launched private labels in 2013 in an attempt to boost margins. The company, which owns three private brands—Penny, Cou Cou and Rosaline—will rebrand these offerings as Zivame to create a single brand, the two people said on condition of anonymity.

“Private labels have been an important strategy even for offline retailers. For online companies, people are circumspect about the product initially. Hence, they have to rely a lot on a third-party brand’s strength. It takes time to build demand for your private brands, but once you get there it is a great strategy because margins are much higher,” said Manish Saigal, managing director and leader-corporate solutions group at Alvarez and Marsal.

“On hindsight, a retailer becoming a single brand is a risky strategy as you are essentially taking risk on brand acceptance. Brand recall might become an issue. Single brand works when people know what brand they need to buy, otherwise they want choices,” he added.

Zivame also plans to adopt the omni-channel strategy by launching offline stores through the franchisee model, which will essentially act as experience centres, said one of the two people cited above. The firm is offering franchises at Rs25-30 lakh for a 1,000 sq. ft store, this person added.

Besides, Zivame is testing global waters and has started shipments to countries such as the US, Canada and the United Arab Emirates, among others, which have a sizeable Indian population.

Zivame co-founder and chief executive Richa Kar did not respond to an email seeking comment.

The firm raised $49 million since inception in 2011 from a clutch of investors, including Zodius Technology Fund, Khazanah Nasional Bhd—the investment holding arm of the government of Malaysia—Unilazer Ventures, IDG Ventures India, Kalaari Capital and Ratan Tata—chairman emeritus of the Tata group.

In an interview during its last fund-raising—a $40 million round, the largest ever by a home-grown online lingerie brand—Kar said private labels account for about 60% of the company’s revenue.

Zivame competes with the likes of Buttercups, Clovia and Pretty Secrets, among others. While Buttercups is backed by former Snapdeal executive Anand Chandrasekaran and Kanwaljit Singh, founder of Fireside Ventures, Clovia has raised about $5 million from IvyCap Ventures. Pretty Secrets has raised $8 million from RB Investments and Orios Venture Partners.

All of Zivame’s competitors sell their own brands.

Launching private labels is a common strategy among e-commerce firms, especially in the fashion business.

For instance, online fashion stores such as Yepme and Zovi sell only private brands, while Myntra generates about one-third of its business from 10-odd private brands.