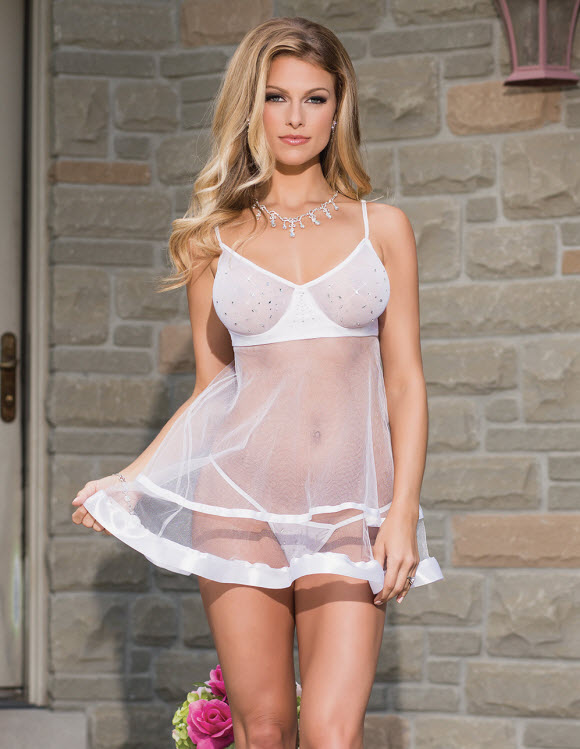 Lingerie (UK /ˈlɑːndʒ.ər.i/ or US /ˌlɑːndʒ.əˈreɪ/) are fashionable and typically alluring undergarments.

Lingerie may also refer to undergarments including flexible, stretchy, sheer, or decorative materials like Lycra, nylon (nylon tricot), polyester, satin, lace, silk and sheer fabric. However, certain cotton or synthetic undergarments can also be considered to be lingerie.

The word derives from the French word linge, “washables”—as in faire le linge, “do the laundry”—and ultimately from lin for washable linen, the fabric from which European undergarments were made before the general introduction of cotton from Egypt and then from India. It is commonly pronounced in English with a faux French pronunciation, such as UK /ˈlɒnʒəriː/ or US /lɒnʒərˈeɪ/ in the doubly non-French American pronunciation. The true French pronunciation is [lɛ̃ʒʁi].

The concept of lingerie as a visually appealing undergarment was developed during the late nineteenth century. Lady Duff-Gordon of Lucile was a pioneer in developing lingerie that freed women from more restrictive corsets. Through the first half of the 20th century, women wore underwear for three primary reasons: to alter their outward shape (first with corsets and later with girdles or bras), for hygienic reasons, or for modesty. Before the invention of crinoline, women’s underwear was often very large and bulky. During the late 19th century, corsets became smaller, less bulky and constricting, and were gradually supplanted by the brassiere, first patented in the 20th century by Mary Phelps Jacob. When the First World War broke out, women found themselves filling in men’s work roles, creating a demand for more practical undergarments. Manufacturers began to use lighter and more breathable fabrics.

As the 20th century progressed, underwear became smaller and more form fitting. In the 1960s, lingerie manufacturers such as Frederick’s of Hollywood begin to glamorize lingerie. The lingerie industry expanded in the 21st century with designs that doubled as outerwear. The French refer to this as ‘dessous-dessus’ which basically means innerwear as outerwear.

The lingerie market at the turn of 21st century was driven by the advent of modern technologies and fabrics that help in designing innovative products such as laser-cut seamless bras and moulded T-shirt bras. Designers are putting greater emphasis on rich-looking fabrics, laces, embroideries and brighter, more daring colors.

The global lingerie market in 2003 was estimated at $29 billion, while in 2005, Bras accounted for 56 per cent of the lingerie market and briefs represented 29 per cent. The world’s largest lingerie retailer, Victoria’s Secret, operates almost exclusively in North America, but the European market is fragmented, with Triumph International and DB Apparel predominant.

Also predominant are French lingerie houses, including Chantelle, Aubade and Simone Pérèle, each with a long history and a commitment to innovation and French style.

Since the mid-1990s, women have had more choice in bra sizes; the focus has changed from choosing bras in an average size to wearing bras that actually fit perfectly. In the UK, for instance, the media is fuelling an awareness campaign about the need for each woman to have a proper bra fitting before every purchase.