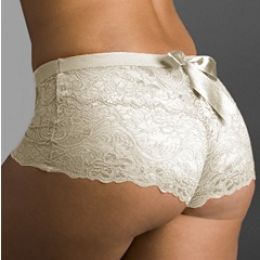 Panties (or knickers in British English) are a form of underwear designed to be worn by women and girls in the crotch area below the waist.

Typical components include an elastic waistband, a crotch panel to cover the genital area (usually lined with absorbent material such as cotton), and a pair of leg openings which, like the waistband, are often made of elastic; materials are chosen to be breathable. While panties were originally designed to cover the entire lower half of the female form, the modern version (since the 1970s) has either no legs or, in some cases, very short ones, and has become progressively more revealing over time.

“Panties” (plural form) is usually used to denote more than one “pair of panties” (singular), whilst “panty” is used in such derivatives as “panty liner” and “panty hose”. The term is usually applied only to female underwear, with “underpants” often used as a term for the male counterpart.

Prior to the French Revolution, women simply wore long, heavy skirts with petticoats under their dresses. A need to cover the lower regions of a woman’s body didn’t arise until the Regency era when the lighter, sheer fabrics of the Empire styles of dress created a need for warm undergarments. As a result, women began wearing pantaloons under their dresses – a loose undergarment derived from the ankle-length men’s trousers of the same name. By the 1820s, women’s pantaloons had evolved into pantalettes, or drawers, a garment consisting of two separate leggings tied at the waist. Within a few decades, the Victorian era ushered in a cultural obsession with modesty, and drawers were re-joined into a single garment, now called knickers (a name borrowed from knickerbockers, a loose style of men’s breeches). By the late 1870s, knee-length knickers were widely worn by women and would continue to be popular through the turn of the century.

In the early 20th century, reforms in women’s fashion put an emphasis on changing women’s clothing styles (including underwear) with mobility, hygiene, and personal health in mind. Women’s fashion continued to relax throughout the 20th century, and knickers continued to change in style in accordance with shorter skirt lengths, slimmer silhouettes, and new materials such as Rayon. Knickers grew shorter with wider, flared legs (see Tap Pants), eventually morphing into what would become the classic, full-coverage briefs style by the 1930s.

As knickers gradually became unrecognizable from their original form, they adopted a new name in the US. By the end of the 1920s, women’s underwear was referred to as “panties”, a term originally used as a diminutive of “pants” (much in the same way that knickers originated as a term). Despite this change, use of the term ‘knickers’ remains prevalent in the UK and New Zealand. The full-coverage panty briefs style continued to change in accordance with contemporary silhouettes and hemlines, but most modern styles would not appear until the 1960s, following the development of more daring clothing fashions (namely the miniskirt) and changing societal views of the female body.

Panties are divided into various types based on such criteria as amount of rear coverage, width at the sides and height at which they are worn. These categories are not necessarily distinct and usage may vary somewhat among brands:

Panties are made of a variety of materials and fabrics, including satin, silk, PVC, cotton, nylon, mesh, lace, rawhide, leather, latex, lycra, and polyester. Construction typically consists of two pieces (front and rear) that are joined by seams at the crotch and sides; an additional gusset is often in the crotch, with the waistband and leg-openings made from elastic.

In countries such as the United Kingdom (UK), Ireland, South Africa, and occasionally in other Commonwealth nations such as New Zealand, panties are often referred to as “knickers”. In Australia, they are usually called “undies”. The term is not generally used in the United States (US) and Canada, where “panties” is usually favored. In the UK, the term “pants” is also used for both men and women’s underwear (not to be confused with the North American usage of pants, which refer to what both Americans and the British call “trousers”).

When wearing stockings, panties are worn over the garter belt, as this makes it possible to remove the garment. When wearing pantyhose or bodysuits, women may also wear panties underneath.