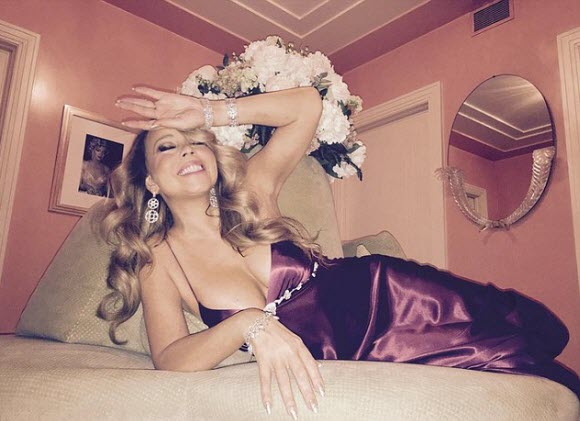 Mariah Carey celebrated wrapping up her eight-night concert stand at the Beacon Theatre in New York City by donning silky lingerie and dripping in diamonds.

The 45-year-old looked glamorous in an Instagram selfie she shared on Saturday, showing off her ample cleavage in the revealing low-cut number.

The singer, who performed the final show for her All I Want For Christmas Is You concert series on Friday, showcased her toned figure in the curve-hugging maroon frock.

The Grammy winner posed on her couch while dressed in the strappy floor-length garment, featuring a sparkling detail above her waist.

The pop diva showed off her diamond earrings and bracelets in the photo, throwing her head back and grinning widely for the camera.

Mariah’s long, golden locks cascaded down her shoulders and back in large voluminous curls.

She captioned the picture:’Relaxing after my shows at @beacontheatre. Thanks #Lambs for celebrating the season with me! #AIWFCIY #christmas.’

The mom of two showed off her svelte body in a form fitting black dress earlier in the day to promote her Hallmark Channel film, A Christmas Melody, her first opportunity at directing a film.

The songstress, who has been in a relationship with Australian billionaire James Packer for six months, recently shared a sweet photo with her beau to her social media.