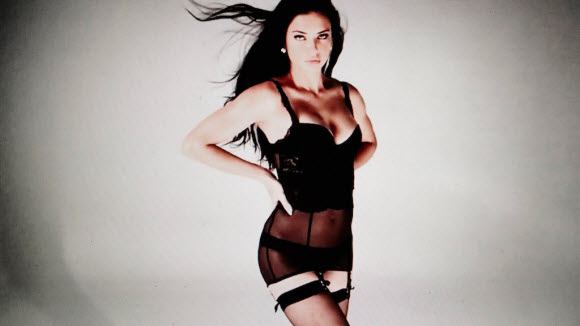 Adriana Lima may make you blush.

The 34-year-old Victoria’s Secret Angel and Brazilian supermodel is the star of Love magazine’s 2015 advent calendar’s entry for Dec. 26, Boxing Day, and boy, does she put on a show.

In a video released by the outlet, Lima writhes around to Rihanna’s 2012 explicit song “Pour It Up” while wearing sexy black lingerie, complete with stockings and suspenders. Her look brings to mind one Kendall Jenner, 19, sports in a previous entry. Lima had also appeared in last year’s calendar.

Other stars of Love‘s 2015 advent calendar include fellow Victoria’s Secret Angel and Brazilian supermodel Alessandra Ambrosio, 34, who appeared topless, former Angel Miranda Kerr, 32, and Gigi Hadid, 20, who like Kendall, walked the Victoria’s Secret fashion show runway for the first time at the annual event this past November.