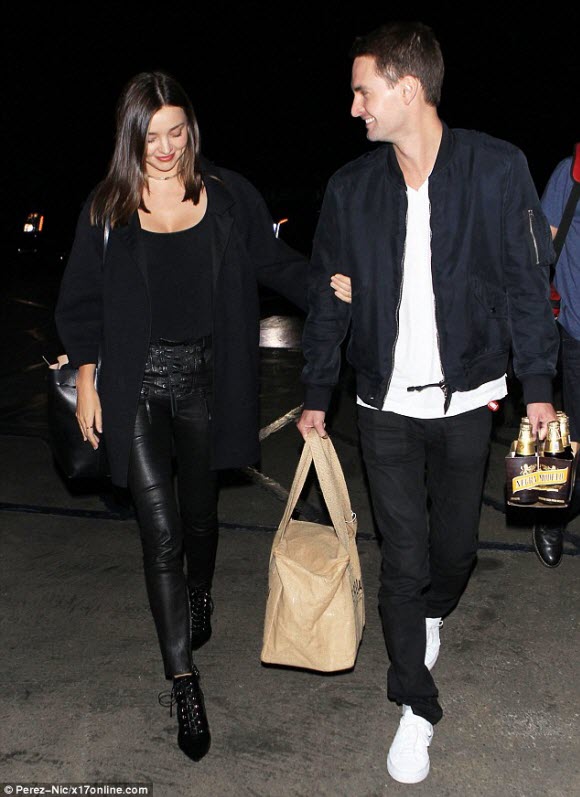 The Australian beauty and the Snapchat co-founder made their red carpet debut at a pre-Grammy Awards party last month (Feb16), but Miranda has now gone public online, sharing sweet shots from their trip to Washington, D.C. on Instagram.com on Friday (04Mar16).

Posting photos of the couple in front of tourist attractions including the Washington Monument and the Lincoln Memorial, the model seemingly timed her decision to publicly share the snaps just as cosy photos surfaced of her ex-husband Orlando Bloom with his rumoured new girlfriend, Katy Perry.

Orlando and Katy have been romantically linked since January (16), when they partied together after the 2016 Golden Globes. They have continued to fuel speculation they are a new couple with a series of outings together, but earlier this week (begs29Feb16), it was clear the stars are more than just friends as they were spotted holding hands while on a romantic break in Hawaii.

Miranda, 32, has been dating technology mogul Evan since June, 2015 and she previously opened up about their low-key love life.

And while she’s found love after her split from Hollywood star Orlando, whom she married in 2010 and later divorced in 2013, there’s no bad blood between the two former flames.

A source tells E! News the model is happy for her ex-husband, and that Katy seems to be “very good” with the former couple’s five-year-old son Flynn.

“She has no anger towards Orlando for dating Katy,” the insider says. “Orlando and (Miranda) communicate well about their son’s well-being.”