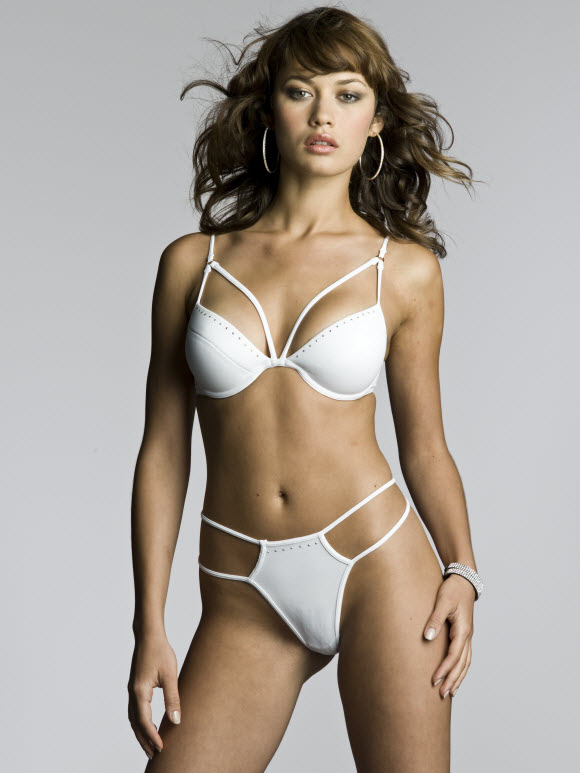 Olga Kurylenko (born 14 November 1979) is a French actress and model.

She was discovered as a model at the age of 14 and at the age of 16 moved from Ukraine to Paris, France to pursue a modelling career. Kurylenko started her acting career in 2005. She found success as an actress for her role as Nika Boronina in the movie adaptation of the video game Hitman (2007), and then rose to fame by playing Bond girl, Camille Montes, in the 22nd James Bond film, Quantum of Solace (2008). More recently she starred in Terrence Malick’s To the Wonder (2012), and alongside Tom Cruise in Oblivion (2013).

Olga Kurylenko was born in Berdyansk, Ukraine, then in the Soviet Union. Her father, Kostyantyn, is Ukrainian, and her mother, Maryna Alyabusheva, is an art teacher of Russian and Belarusian ancestry, who was born in Irkutsk Oblast, Russia.

When Kurylenko was three years old, her parents divorced, leaving her to be raised by her mother. Kurylenko rarely had contact with her father, meeting him for the first time after the split when she was eight years old, and later again when she was 13.

Olga Kurylenko was discovered by a female model scout while on vacation in Moscow at the age of 13. At the age of 16 she moved from Ukraine to Paris, France. In 1996, she signed a contract with the Paris-based Madison modeling agency.The following year, by the age of 18, she had appeared on the covers of Vogue and Elle. While working as a model in Paris, Kurylenko supported her mother in Ukraine.

She also appeared on the covers of Madame Figaro and Marie Claire. She became the face of brands Bebe, Clarins, and Helena Rubinstein. She has also modeled for Roberto Cavalli and Kenzo and appeared in the Victoria’s Secret catalog.

Olga’s first acting appearance was in Seal’s music video, “Love’s Divine” in 2003, but her film career began in France during 2005. She received the certificate of excellence award at the 2006 Brooklyn International Film Festival for her performance in L’Annulaire, and also starred in the Paris, je t’aime segment “Quartier de la Madeleine” opposite Elijah Wood. That same year, she was selected to be the face of Kenzo’s new fragrance, Kenzo Amour. She has appeared in all subsequent Kenzo Amour ads.In 2007, Kurylenko starred in Hitman alongside Timothy Olyphant. She had a minor role in Max Payne as Natasha. She played Bond girl Camille Montes in the 2008 James Bond film, Quantum of Solace. In the film she plays the role of a Bolivian Secret Service agent named Camille, who teams up with James Bond to avenge the death of her parents.

She was featured on the cover of the December 2008 issue of the U.S. edition of Maxim magazine and on the cover of the February 2009 issue of the Ukrainian edition of Maxim. In Ukraine the then-mayor of Berdyansk suggested naming a street after her in early 2008, and Kurylenko and her mother met Ukraine’s First Lady Kateryna Yushchenko in President Yushchenko’s family country house.

Kurylenko acquired French citizenship in 2001. In 2008, Maryna Alyabusheva, Kurylenko’s mother said, “She changed her citizenship from Ukrainian to French long ago.” In 2000, Kurylenko married French fashion photographer Cedric van Mol, but the couple divorced four years later. In 2006, she married American mobile phone accessory entrepreneur Damian Gabrielle.They divorced in late 2007. She moved to London in 2009. Kurylenko is a philanthropist noted for her work for the underprivileged, focusing on children in her native Ukraine.