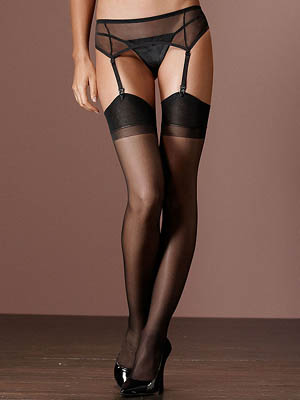 A stocking (also known as hose, especially in a historical context) is a close-fitting, variously elastic garment covering the foot and lower part of the leg.

Stockings vary in color, design and transparency. By analogy, the term is also used to describe a type of horse marking in which the white coloring extends from the horse’s hoof to just above the knee.

Today, stockings are primarily worn by women for fashion and aesthetics, usually in association with mid-length skirts. They can also be worn for increased warmth. They are also sometimes worn by men, and in cross-dressing and fetishism.

Historically, even though the word sock is at least as ancient in origin, what men normally wore were often referred to as stockings, probably especially when referring to longer hose at times when they were the fashion for men. The word stock used to refer to the bottom “stump” part of the body, and by analogy the word was used to refer to the one-piece covering of the lower trunk and limbs of the 15th century—essentially tights consisting of the upper-stocks (later to be worn separately as knee breeches) and nether-stocks (later to be worn separately as stockings).

Before the 1590s, stockings were made of woven cloth. The first knitting machines were for making stockings. The stockings themselves were made of cotton, linen, wool or silk. A polished cotton called lisle was common, as were those made in the town of Balbriggan.

Before the 1920s, women’s stockings, if worn, were worn for warmth. In the 1920s, as hemlines of women’s dresses rose, women began to wear stockings to cover the exposed legs. These stockings were sheer, first made of silk or rayon (then known as “artificial silk”), and after 1940 of nylon. The first pantyhose made an appearance in the 1940s and 1950s, when film and theater productions had stockings sewn to the briefs of actresses and dancers, according to actress-dancer Ann Miller and seen in popular films such as Daddy Long Legs. Today, stockings are commonly made using knitted wool, silk, cotton or nylon (see hosiery). The introduction of pantyhose in 1959 provided a convenient alternative to stockings, and the use of stockings declined dramatically. In 1970, U.S. sales of pantyhose exceeded stockings for the first time, and has remained this way ever since. Beginning in 1987, sales of pantyhose started a slight decline due to the newly invented hold-ups, anyway they still remain the most sold kind of hosiery.

Stockings are sometimes preferred to pantyhose for a number of reasons. These may include the perception that stockings, and the associated use of garters, lace, high fashion, appliqué and the exposure of the thigh, are more aesthetically pleasing, or sexually attractive, than pantyhose. They are also regarded as cleaner and healthier, while pantyhose tends to create a humid and warm environment in the crotch area, increasing perspiration and potentially promoting fungal and bacterial growth. Stockings, on the other hand, provide ventilation in the crotch, resulting in a reduction of fungal and bacterial growth.

However, stockings have a drawback in colder weather, because more skin is exposed to the cold compared to pantyhose. Also, pantyhose does not require garters and garter belts, does not need to be adjusted as much, and leaves a smoother line under form-fitting clothing.

Stockings can be held up in one of three ways:

In modern usage, stocking specifically refers to the form of women’s hosiery configured as two pieces, one for each leg (except for American and Australian English, where the term can also be a synonym pantyhose). The term hold-ups and thigh highs refers to stockings that stay up by the use of built-in elastic, while the word stockings is the general term or refers to the kind of stockings that need a suspender belt (garter belt, in American English), and are quite distinct from tights or pantyhose (American English).