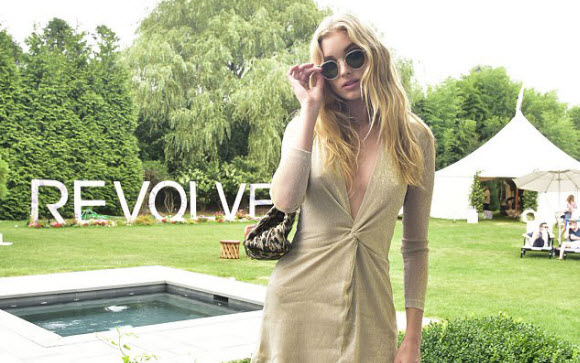 Victori’a secret angel Elsa Hosk, 28, showed off her stunning physique in a gold dress as she made a playful appearance at the FIJI Water at #REVOLVEintheHamptons bash on Saturday.

The Swedish stunner daringly went braless for the glittering party in a plunging golden dress which flashed her pert cleavage and ample assets. 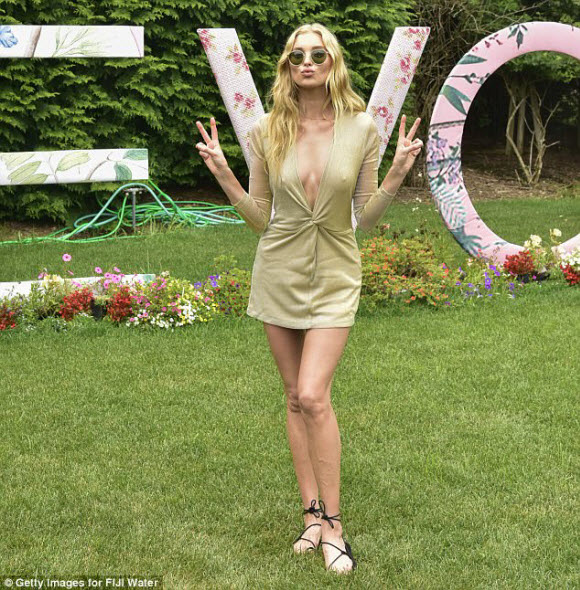 Elegant ruched detailing on the waist drew attention to her slender midriff.

Thanks to the thigh-grazing number, the 5ft10  beauty showed off her endless, toned pins.

Forgoing the vertiginous heels for the occasion she slipped on some black lace-up sandals.

Her California blonde locks were styled into soft beachy waves which were parted in the middle, with her sparkling peepers hidden by round shades.

Her glowing complexion was highlighted with deftly applied touches of make-up.

The clotheshorse was clearly in a playful mood for the bash, adjusting her sunglasses and flashing the peace sign while pouting her lips.

Elsa was in good company for the party hosted by the women’s e-commerce brand, as she was joined by fellow angel Josephine Skriver, 24 and former VS star Chanel Iman, 26.

Chanel revealed her envy-inducing abs in a blush pink floral shirt which was tied above the waist, teamed with denim hotpants.

Her raven locks were styled sleek and straight into a side parting and she accessorised with a candy pink manicure and oversize gold hoop earrings.

The Vogue coverstar accentuated her feline eyes with fluttery lashes and added a touch of soft pink lipstick.

Clearly having received the midriff memo, Danish stunner Josephine flashed her bra and her toned waist in a lemon knotted blouse which she paired with a A-line ivory skirt.

Her caramel hair was worn in cute plaits with a white headband holding her tresses off her face.

She accessorised with jade mirrored shades.

Striking a thoughtful pose, the star flashed his many inkings as well as a clutch of silver rings and bracelets.

The bash was a welcome break from Elsa’s hectic schedule, with the top model recently joining a bevy of lingerie-clad Victoria’s Secret beauties for Justin Bieber’s steamy 2U video. 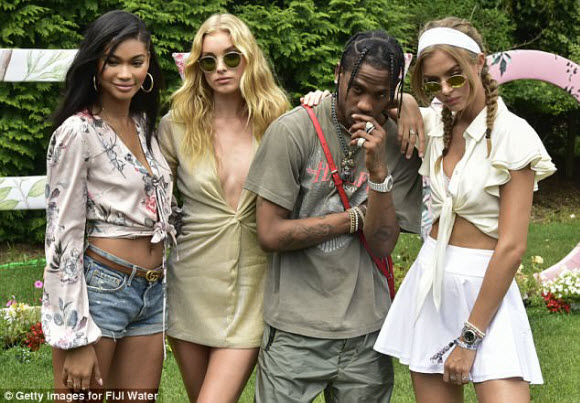 It featured an array of fashion shoot-inspired scenes with Elsa stripped down to her bra as she readied for her photo shoot.

Elsa has walked in the Victoria’s Secret show since 2011, and was promoted to Angel status in 2015, joining an elite group of famed supermodels that include Alessandra Ambrosio, Behati Prinsloo and Stella Maxwell.