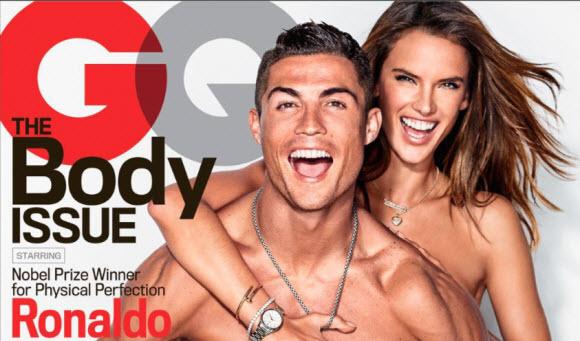 Two of the hottest Brazilians in the world recently faced off on the soccer field. Supermodel Alessandra Ambrosio showed soccer great Cristiano Ronaldo that she had ball skills that could put him to shame.

Latina revealed that Ambrosio and Ronaldo started a game of head soccer and did their best to keep up with each other. The two managed to exchange about 10 times before Ronaldo succumbs, proving that the beautiful supermodel was the better player.

The two Brazilians got together to shoot the 2016 Body Issue of GQ Magazine. Ambrosio was topless and only wore black string bikini bottoms while Ronaldo only had a red Versace trunks on for the cover photo. The two had some jewelry on but generally had their great bodies to show off for the special edition. The pages will also feature more sizzling photos of the beautiful models. Ben Watt took the photos of the two stars.

GQ reported that the Victoria’s Secret angel actually never met the Real Madrid star in the flesh before until their GQ photoshoot. The two actually have a lot of things in common, such as speaking Portuguese, having young children and having worked as models in the past several years. However, Ambrosio had the advantage in terms of modeling so she helped Ronaldo feel more at ease with the camera.

Ambrosio shared a video of their football head game with the caption, “We had a lot of fun!!” In one behind-the-scenes video, the two also played foosball before shooting more images.

To maintain their fit bodies, both Cristiano and Alessandra engage in regular exercise and strict diet regimens. Ronaldo constantly trains with Real Madrid while Ambrosio works out with a personal trainer several times a week.

Sportskeeda wrote that Ronaldo trains five times a week, with each session last three to four hours. As for Alessandra, Glamour wrote that she does Pilates and core exercises to maintain her lean figure. The two also work with expert dietitians and trainers to keep their intake in check and stay healthy. They also do not smoke and drink. However, they would reward themselves with a treat every now and then.

The 2016 GQ Body Issue is expected to be one of the best releases ever. More updates and details about the edition and its Brazilian stars are expected soon.