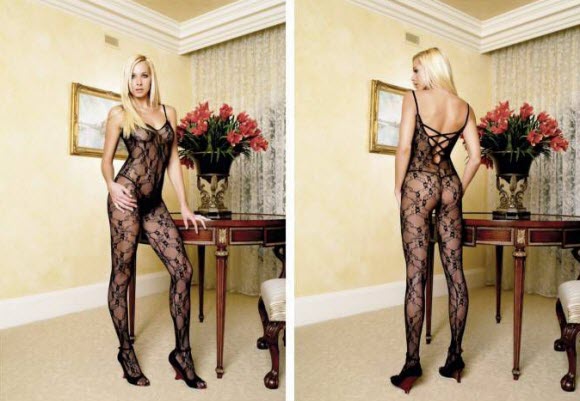 A bodystocking is a one-piece article of lingerie that covers the torso, legs and sometimes the arms of the wearer.

Similar in texture and look to stockings or pantyhose, a bodystocking is not a unitard, which is worn as an outfit or article of clothing, or a leotard, which is used as a practice garment or performance costume for acrobats, gymnasts and other similar performers. Designed to be revealing, bodystockings are worn as undergarments by a belly dancer or an exotic dancer’s costume.

A bodystocking may be worn for the smooth line it gives or because it cannot become untucked from trousers or a skirt. It is usually worn as underwear, and is usually not worn with other underwear. It may, however, be worn with a bra or panties for extra coverage or support. Due to the sheer look of most bodystockings, they are generally not worn alone.

Opaque bodystockings can be worn in place of tights and a blouse. Bodystockings also come in lace, fishnet and satin, the latter which may just consist of the top portion of the bodystocking, allowing it to be worn underneath a suitjacket to serve as a blouse. These types of bodystockings are also made sheer, allowing for one to wear a more revealing outfit coupled with sheer coverage for line smoothing, similar to Spanx.

Due to its design and the close-fitting and one-piece aspect of bodystockings, the wearer may have to remove the entire garment in order to use the restroom.

It is unclear when the first bodystocking was made or when it was first worn.

The first notable occasion, however, was when American actress Adah Isaacs Menken wore one in 1861 in the play Mazeppa, based on Byron’s “Mazeppa”, in which she played a Polish man who was tied nude to the back of a wild horse by his enemies. In the scene Menken wore a flesh coloured bodystocking to preserve her modesty while giving the illusion of nudity. The practice created controversy.