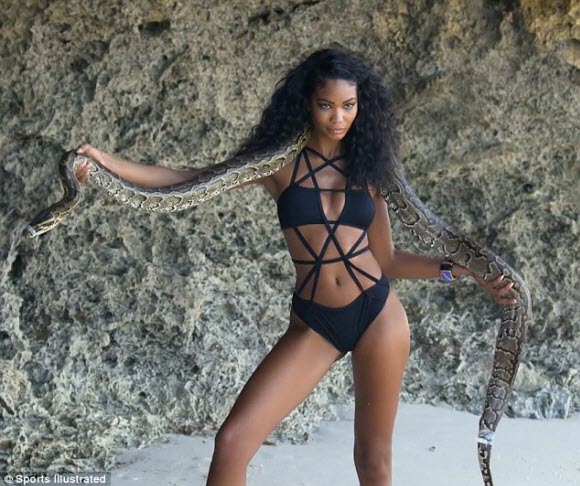 She has stunned in the pages of the iconic publication before

And this year Chanel Iman added a bit of slither to that sizzle.

The 25-year-old model was posed with a large python draped over her shoulders for her Sports Illustrated Swimsuit Issue shoot.

Chanel seemed to be a consummate professional despite working with the deadly snake as she oozed of confidence while posing with it.

The brunette beauty seemed to take full control of the large serpent as she would confidently grab it with her hands for the racy shoot.

She looked absolutely gorgeous as she showed off her fantastic model figure in an intricate black one-piece which revealed her torso.

Chanel wore her voluminous curly brunette locks down as she sported natural, complimentary make-up on her face topped off with pink lip.

The Atlanta-born model talked about the experience to People: ‘I started off with one python snake and then they brought out the second one.

‘It was really easy because their mouths were taped, but there’s always that fear that the tape might come off and they might just squeeze the crap out of you … especially when they’re around your neck, and they’re on your arms, you don’t know what they’re gonna do, so there’s always a little bit of fear that something could go wrong on the shoot.’

She worked with famous photographer Ruven Afanador for the shoot in beautiful Zanzibar.

Not only did she pose with a python but she also had the opportunity to pose alongside Maasai warriors.

In a photo shared by Chanel on Instagram on Monday, she could be seen flanked in between two warriors draped in red gear.

She told People that they had attempted to gain her affection with cows as she explained:’It was funny because the Maasai warriors were basically trying to get me to move to Africa and bidding on cows.

The Sports Illustrated Swimsuit issue is on newsstands now.