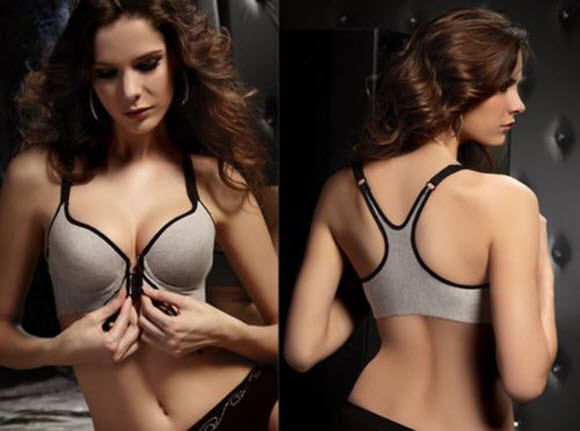 Today’s sports bras are the products of considerable scientific and technological research.

breasts are getting bigger, with an annual survey indicating the average woman’s bra size has increased from a 36C to a 36DD – an increase in mass of around 430g. Research has shown that having larger breasts can put some women off participating in sports or exercise and evencompromise sports performance.

Sports bras are extremely important for women in competitive sports, but they’re also of significant benefit for all women who exercise. Compared to typical bras, today’s sports bras are the products of considerable scientific and technological research. Sports bra design and innovation has moved on greatly from the first general exercise bra developed by Lisa Lindahl and Polly Smith in 1977, which was in fact two jockstraps sewed together.

Recent developments include seamless knitting, and even tiny sensors and built-in actuators that alter the level of support the bra provides as required. Some sports bras today contain nanostructured textile sensors that communicate with your smart phone to monitor your cardiac health, and even help to detect breast cancers.

During exercise, a woman’s torso moves in many different directions at different speeds. Since breasts contain no muscle and have limited internal support, they are essentially a mass of soft tissue that moves independently of, but is driven by, the motion of the torso. It’s this movement that sports bras and other support clothing works to reduce, altering the underlying mechanics to minimise the breasts’ motion independent of the rest of the body. This can minimise discomfort or pain, and even improve sports performance. It’s been shown that over a distance of 5km a sports bra can improve running technique, making it more economical compared to an everyday bra. 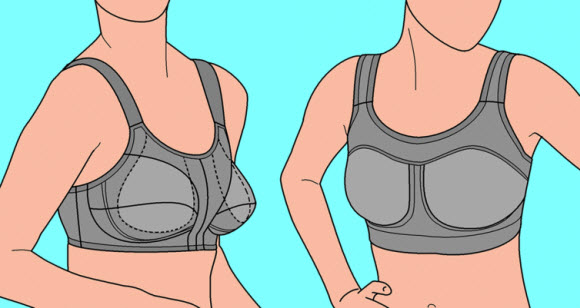 Of course, the demands placed on a sports bra increase with breast size, but larger breasts place greater demands on the body, too. Many women with larger breasts suffer from a sore back and shoulders, for example. A greater mass on the front of the body places additional strain on the posterior chain – the muscles that run down the back of the body that are key to correct posture. If these muscles have to work harder, this increased effort will require more energy.

For sportswomen, this essentially means carrying additional body mass that offers only a performance penalty rather than any gain. In sports that require pound-for-pound strength and whole body locomotion such as gymnastics, athletics or many field sports, women with larger breasts may be at a slight disadvantage.

However, there are limitations to what a sports bra can do. Some elite sportswomen have gone to more extreme lengths to reduce their breast size to improve performance. In 2009, Romanian tennis player Simona Halep had breast reduction surgery to go from a 34DD to 34C to help improve her reaction time and speed. Her worldwide ranking, previously below 450, improved such that by 2014 she was seeded third at Wimbledon. Her tennis coach commented that “her strokes are less restricted now that those obstacles have been reduced”. 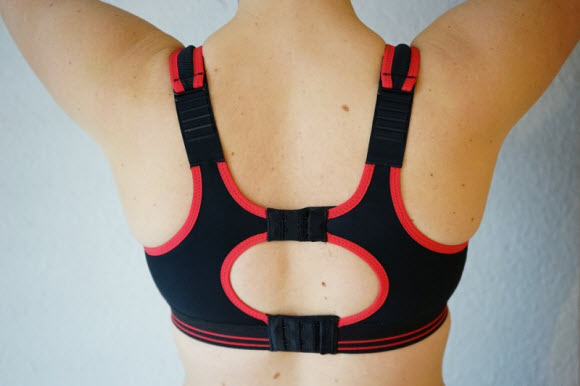 Australian athlete Jana Rawlinson, winner of the 400m hurdles at the 2007 World Championships, revealed that she had breast implants removed to improve her chances at the 2012 Olympics. Indeed, according to American Society for Aesthetic Plastic Surgery’s statistics, more than 100,000 women had breast reduction surgeries last year, some of whom may well have made the decision due to playing sports.

Of course, having larger breasts doesn’t rule women out of playing sports or from Olympic-level competition, as there are many attributes both physical and psychological that contribute to sporting success. But wearing proper sports bras, regardless of breast size, has been shown again and again to provide the support required to hold breasts steady and reduce or eliminate any pain women may experience. All athletes need support, and a good sports bra is an important part of it.