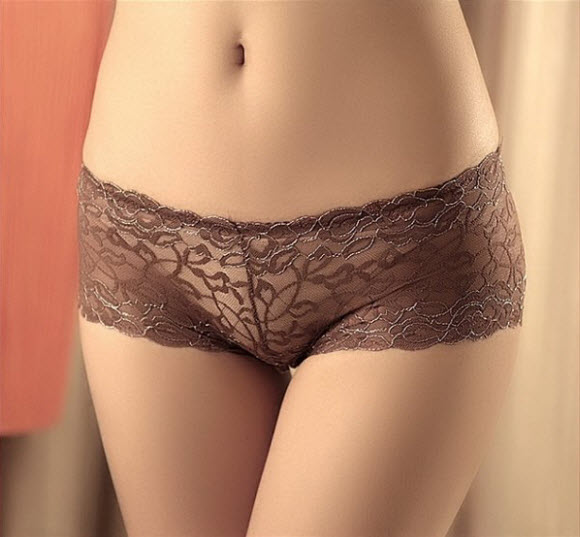 The best thing to happen to intimate clothing and sexy lingerie since French knickers, boyshorts are a relatively recent experiment in making your butt look fantastic.

They provide comfort together with a sexy insinuation, and eliminate panty lines in the bargain. You may find them referred to as boy short panties, boy’s cut, booty shorts, or tap panties, but boyshorts is what they’re most commonly called. Even though boys really like girls wearing them, that’s not how boyshorts got their name. Instead the name comes from men’s knit boxer shorts which are very similar in appearance. Men in knit boxers are pretty sexy, right? Well there’s a reason for that. Knit boxers are designed so that they cover the whole of the buttocks, but stay low around the waist. They’re a variation of the old style men’s loose-fitting boxer shorts. The snug-fitting knit, together with the low waist, makes for a hot look, and also provides a degree of support which is undetectable.

Women who have wanted to avoid panty-lines while wearing a full panty would formerly have had to resort to the previously mentioned French knickers. They do the trick, but they go down to cover the top of the thighs and only really work if you’re going for a retro-look. Women who didn’t insist on a full panty could solve the problem of panty-lines by wearing thongs. Thongs are sexy, and also get rid of panty lines but aren’t anywhere near as comfortable as boyshorts.

Boyshorts, on the other hand, are a fresh take on the problem. Sexy, simple, and at the same time so deliciously cute, your hardest problem will be choosing a pair. Do you want plain, understated, tom-boy style functionality? There are boyshorts built for you. Want to get girly? Just add lace. Boyshorts come in a large variety of flattering choices: lace-trimmed, printed, striped, sheer seamless, smooth- even a sort of thong-cut, which is very skimpy in the back. And you can find them in every solid color you can imagine as well as prints and stripes. If you sometimes can’t contain your naughty side – but sometimes you can – consider getting boyshorts with a ruched front. The ruched front lets you choose just how much cheek to expose. You can be naughty, then nice, then really naughty with the same pair of panties. In these tough economic times that’s a real plus.

Now, it’s easy to go from panties to boyshorts, but you may have a harder time giving up your thongs for them. That’s understandable. You’ve probably gotten a lot of compliments on how well your derriere suits a thong. Don’t worry. If you look good in a thong you’ll look terrific in boyshorts. If you doubt this, just ask some boys. Boyshorts are as practical as they are cheeky, and you won’t go wrong with adding a pair, or five, to your lingerie wardrobe. They are the best solution when you want to eliminate panty-lines without compromising comfort, or sexiness.

Want to really surprise your man this Christmas? Wrap up a lacy, sexy pair of boyshorts and put them in his stocking. They’re for you, but the gift is for him! Try them on and strut around the Christmas tree one time. He’ll show you his appreciation!

Men, if you want to set the flame this holiday season, wrap up a pair of boyshorts for your sweetie. When she opens them and looks at you, she’ll know immediately that you find her sexy and attractive.