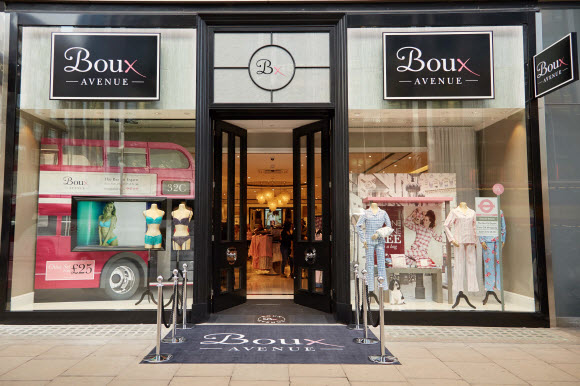 The company has signed deals with German ecommerce giant Zalando and US retailer Nordstrom for autumn 17, as the business continues to drive wholesale growth, having launched on Asos, Very, Lipsy and Littlewoods last year.

Last week, the brand opened its first dedicated warehouse and distribution facility in Crewe. It spans 70,000 sq ft and has 150 staff members.

Boux Avenue also invested in upgrading its IT systems earlier this year, to make its platform “more international and mobile-friendly”.

Paphitis told Drapers: “We’ve come of age – we’re no longer a fledging. Boux is grown up now, and no longer a teenager. It’s left home and moved into its own distribution unit.

“We’re embracing a revolution in retail and the way consumers interact with retailers. [Boux has] got good market share that’s growing every year, it’s self-sufficient now [and] doesn’t rely on any other group activity. Its focus is to grow internationally as well as in the UK. As I keep telling the team, we’ve got the world to go for.”

In the UK it recently signed a lease on a shop in the Midlands – it declined to reveal the exact location – which will bring its UK store count to its target of 30.

Boux Avenue declined to disclose what percentage of its sales are international.

According to Paphitis, one of the business’s challenges is aligning its franchising strategy with its online approach.

“[It’s about] how to make them work together and making sure your franchise partners are rewarded for the brand awareness you’re undoubtedly getting by their presence and expenditure, and [servicing] their customers. That’s been a challenge [that] we’ve enjoyed.”

“The plan always was that in the first ten years we’d concentrate purely on [building] the brand and lingerie,” explained Paphitis, who launched the retailer in 2011.

“You’ve got to be in a solid position before you start experimenting. There’s limited space to cater for brand extensions in stores so you’ve got to get those right. There’s a whole raft of brand extensions that Boux can look at – you might see something in this space sooner than anticipated.”

On current trading in the UK Paphitis said: “We are running this brand in what is a difficult environment. [But] we’re trying to be efficient, getting the right product at the right price and right time into stores. At the end of the day, the business is very much a web-based business – when we launched, we said we were a website with stores, not stores with a website. So we’re ahead of the game as far as that’s concerned.”