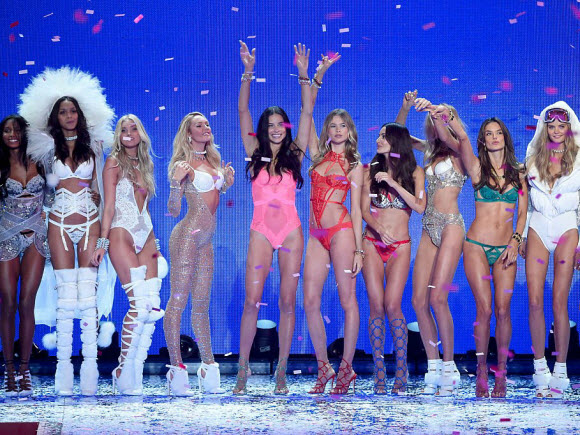 The lingerie industry is going through a massive change.

Rail-thin models are being replaced with a variety of body types at lingerie companies from Aerie to Adore Me as self-acceptance and natural beauty replace the restrictive norms of the past.

This new attitude from consumers threatens everything that Victoria’s Secret’s marketing is known for, from the Photoshopped ads of Angels to the outrageously produced fashion show.

And now Adore Me — a company that explicitly told Business Insider in the past that it’s out to “slay Victoria’s Secret”  — has hired Aerie’s popular spokesmodel Iskra Lawrence.

Arguably, Aerie pioneered this movement when it abandoned Photoshop in 2014. It launched its campaign #AerieREAL, and has advertised women that have other body types beyond the typically pin-thin model found it most lingerie spreads, and found a star in the curvy Lawrence.

Last week, Lawrence shared an uphotoshopped photo of herself from her new Adore Me campaign on Instagram. Notably, it features her in between two traditional looking models, showing that yes, all women can be depicted together.

“From when I started modelling at 13 to around 19 (when I was only about a UK 10 or US 6/8) I would have crumbled inside standing next to these two beautiful women and would have been way too insecure to share a pic like this,” she wrote in the post, followed by a story about how she’s come to terms with her body and a message about loving oneself. Lawrence has become something of a poster girl for body positivity.

Adore Me has also utilised curvy model Sophie Tweed-Simmons. The company seems to be on a mission to promote inclusivity.

“Adore Me’s vision is to revolutionise the lingerie industry by creating beautiful, affordable intimates for every body type. We believe that every woman, in every size and body shape, deserves to feel strong, confident, beautiful and sexy in her own skin,” CEO Morgan Hermand-Waiche wrote to Business Insider. “We are extremely proud to be the only major lingerie line to offer accessible and inclusive fashion that ranges from petite to plus (sizes 30A-44G for bras and XS-6XL for sleepwear designs).”

“Part of our mission to redefine lingerie is to challenge common perceptions of what constitutes being beautiful and sexy. For Adore Me, a world where you have to be a certain size in order to be considered beautiful is simply unacceptable,” he added.

But women may not even need a lingerie company to tell them that; their perceptions of what’s beautiful and sexy have inherently changed. If the shifts in the dieting industry can tell us anything, it’s that women know that they can have curves and be healthy, and that wellness, not thinness, is now the goal.

Much of the commercial world has caught on, which makes Victoria’s Secret look practically retrograde.  Ashley Graham has graced the covers of Sports Illustrated and Maxim — two magazines that traditionally target men — almost as proof that the pendulum is swinging in favour of body types, and it might be because of how social media has helped women who might normally not have had voices have had vehicles through which they can communicate.

“Social media in general has given a voice to consumers who might have and have actually up til now felt invisible,”  Kristy Sammis, founder, Chief Operating Officer, and Chief Creative Office of Clever Girls, an influencer marketing organisation, told Business Insider.

Part of her mission with her company, though, is to help “brands understand that they don’t control the narrative anymore. They don’t get to say what [we] should like anymore. And so I think Victoria’s Secret’s having a bit of a challenge with that. For so long they have been able to kind of direct that narrative and say, ‘this is what’s a beautiful sexy body looks like,’ and consumers are saying ‘ no, actually my body is what a beautiful, sexy body looks like.”

That’s a lesson Victoria’s Secret knows all too well.

In 2014, Victoria’s Secret came under fire for for its “Perfect Body” campaign, though the company ultimately killed the campaign and changed the verbiage to “a body for every body.” But was it really every body?

Following the campaign, curvy model Brittany Cordts launched a petition on Change.org asking the company to actually show every type of body — or at least, beyond the models that it displays in its fashion show.

Of course, it doesn’t help that the company doesn’t sell plus sizes, either. And some women just want to see more accurate depictions of what women actually look like — which is arguably why Aerie’s Photoshop-free campaign has performed so well. Interestingly enough, in an unusual attempt to sell “what’s real” — that is to say, what is without padding — Victoria’s Secret has been zeroing in on selling the padding-free bralette.

But it’s not just about showing a variety of body types, it’s about catering to the consumer.

In fact, earlier this year, a Victoria’s Secret Facebook photo got heat being so overtly sexual that it rendered itself bordering pornographic. Customers on Facebook were furious and called it “trashy”; was this underwear for women or for men?

“There’s this sense that the body love influencers are really etting their own and doing it for each other and themselves, and  [that[ it’s about … making themselves feel more confident versus what Victoria’s Secret tends to do which makes it feel like it’s for men,” Kristy Sammis, founder of marketing firm Clever Girls, told Business Insider.

For the most part, numbers show that when companies show more accurate depictions of women for women, sales improve.  Since abandoning Photoshop, its sales have skyrocketed; in its most recent quarter, the company saw comparable sales soar 32%.

Adore Me has also seen profits skyrocket over the years. In fiscal 2015, it took in $42.7 million in revenue — still, nothing on Victoria’s Secret’s nearly $7.7 billion from fiscal 2015 — but it is rapid growth from 2014, when it took in $16.2 million. (The company, which operates primarily on a subscription model, has not been without its struggles; it has been plagued by consumer complaints about its business model and formal complaints filed by advertising watchdog firm Truth in Advertising.)

Hermand-Waiche said that Lawrence and Tweed-Simmons were two of Adore Me’s best-selling models on the company’s website, too.

There’s even a void in Victoria’s Secret marketplace that seems suited to showcase models like Iskra Lawrence: PINK, the company’s successful, teen-oriented brand, whose advertising is more flirtatious and less blatantly seductive in nature — though it misses out on the older consumers.

“Pink has done a much better job of desexualization while remaining fun and flirty and sexy in a more lighthearted way. They now own the younger demographic, leaving the older woman (25+) a bit disenfranchised.  Most women I know are not particularly proud to shop there (even though they may order their bras online),” Malinda Sanna, Founder & CEO of consumer insight firm SPARK Ideas wrote in an email to Business Insider.

Although interestingly, the reason that Victoria’s Secret’s main line eschews this sort of advertising is because, despite everything society is telling them, is that their customers — despite what they may be saying on social media — don’t seem to mind. A surreptitious Victoria’s Secret Photo shopper recently told Refinery 29 that curvier models don’t sell products as well.

“One time, during a swim season, they had these two girls come in that had abs and thick thighs and busts. They were really toned and their skin was amazing. They were still obviously models. But they were a different look. But, they didn’t sell anything and so they stopped using those girls,” the photo editor, who went by Sarah, told the website. (She didn’t, however, mention when this incident occurred; a lot has shifted in the way of consumer’s acceptance and self-love recently.)

And why would Victoria’s Secret want to lose out on sales? After all, during a time when most retailers are faltering, it holds the whopping majority of the lingerie market and makes billions of dollars.