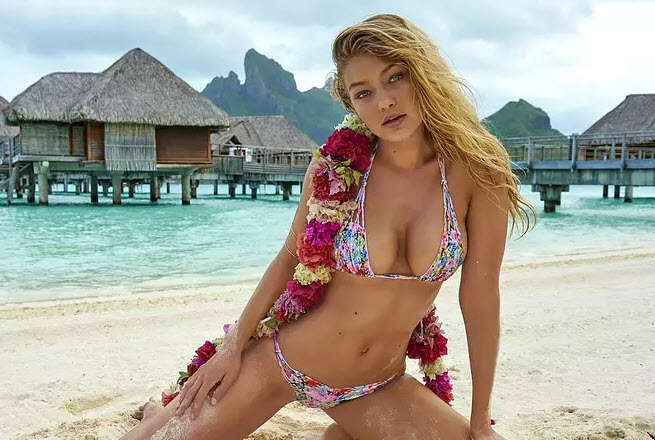 Gigi Hadid was spotted posing topless on a Paris rooftop for a new ad campaign for Chanel, and was nearly unrecognizable with her new style!

Gigi Hadid, 24, is channeling the late Coco Chanel! The supermodel was spotted rocking a short black wig, reminiscent of the iconic designer’s go-to haircut, as she struck a pose at a photo shoot in Paris on Tuesday, Dec. 3. Standing on the roof of the Opera Garnier, the model was topless for the photos as she wore a sheer black maxi skirt with the brand’s signature chain detail around the waist, and a pair of black gloves featuring the double CC logo. She completed the look a gorgeous pearl necklace — also a signature item for the brand — that seemingly spelled out the letters “CHANEL.” Gigi stunned in the sexy look but was nearly unrecognizable with her new much-darker ‘do that reminded us of her sister Bella Hadid, 22! Kudos to Gigi for baring it all in the freezing Paris weather, which has been in the 40’s all week long!

In other photos, the model appeared to emulate a 90’s inspired grunge look as she changed up her clothes — wig in tact. Surrounded by a film crew, she could be seen rocking a white off-the-shoulder t-shirt with nothing underneath, paired with a black quilted bomber jacket. She complimented the outfit with vintage-inspired pair of No. 5 earrings, inspired by the luxury house’s fragrance, dramatic sunglasses and a throwback brown lipstick.

The moody shoot comes only a day after she walked in Chanel’s Metiers d’Art Show for the Pre-Fall 2020 collection at Le Grand Palais on Monday, Dec. 1. She stunned at the show in a holiday-ready look, dazzling with crystal-inspired makeup and a structured ponytail, and sporting one of the brand’s luxe tweet suits! She strutted down the runway in the blazer with nothing underneath — a la Emily Ratajkowski — and accessorized with layers of the brand’s pretty pearl necklaces and a gorgeous round toe pump with bow details. 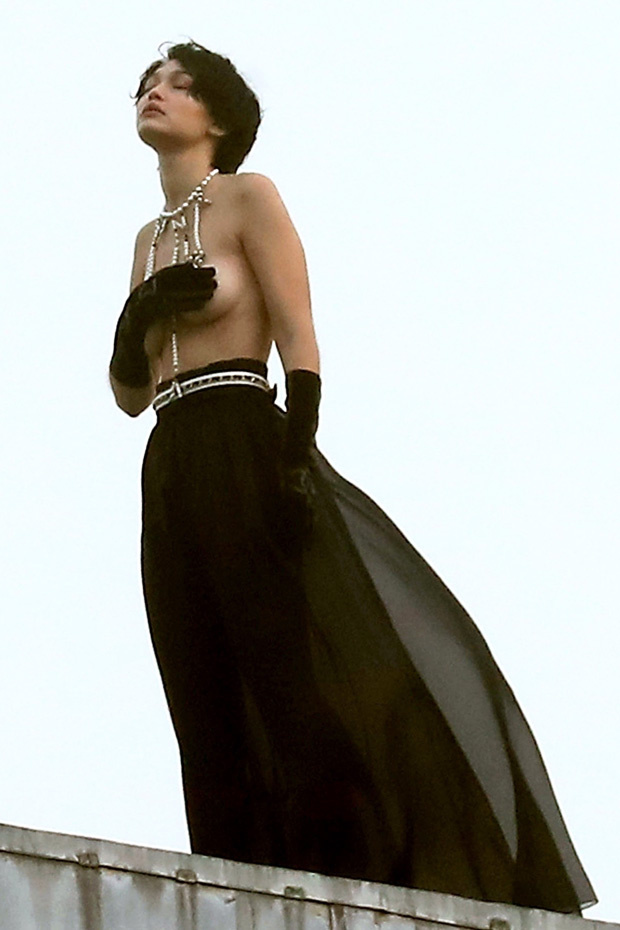 Gigi has been a fixture at Chanel shows in past years, even saving the day after French comedian and performer Marie Benoliel inappropriately crashed the runway during an October show. Immediately realizing the interloper was attempting to walk in the show, Gigi quickly blocked her from moving any further, then confidently placed an arm on her shoulder and escorted her off the stage. While Gigi has worked with the brand on their runway shows for several years, this new shoot marks the first official campaign she’s participated in with the brand!